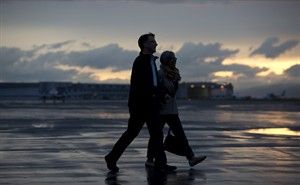 Photo: The Canadian Press. All rights reserved.
BC NDP leader Adrian Dix and his wife Renee Saklikar make their way to their campaign plane in Vancouver, Sunday, May 12, 2013. THE CANADIAN PRESS/Jonathan Hayward

The leaders of British Columbia's two main political parties sprinted to get their message out Monday, one day before the finish line would deliver one of them an election victory.

He planned to continue his efforts to woo voters until 7 a.m. Tuesday, an hour before polls open.

Liberal Leader Christy Clark also had a long day ahead, with 10 events scheduled until Monday night in her home riding of Vancouver-Point Grey.

For Clark, the last full day of campaigning was similar to the first, as she warned voters about what the New Democrats could do to the provincial economy.

Surrounded by Liberal candidates in a packed office in Surrey, B.C., Clark said only the Liberals can save the province from the NDP.

"Every one of you has it in your power to stop the NDP's out-of-control spending that will drive British Columbia back into the ditch we were in the 1990s."

Dix said that if the New Democrats win the election the party would be inheriting a negative fiscal situation and a jobs plan that actually shed employment.

He agreed that the economy is a top priority and said the New Democrats would work with business, labour and communities to invest in skills training.

"A platform that is pro economic growth but takes care of our environment. We don't believe that there's a contradiction there," he said in the opening hours of his 24-hour marathon.

"I think that people who vote on the economy in this election need to seriously consider voting for the B.C. NDP," he told reporters.

Clark's Liberals were well back in the polls when the election campaign started last month, but recent surveys say she's managed to close the gap.

She even took a few minutes to chide Dix for his 24-hour campaign, saying he was taking voters for granted.

"The NDP marathon tour reminds me of the kid who forgot to do his homework and then at the last minute, the night before, decides to cram for the exam," she said. "My experience is if you want to succeed on exam day, you do your homework for the month before."

She said she was feeling really confident about Tuesday's vote because party members worked very hard to succeed.

"As we've travelled the province and the momentum has built, I really have heard people talking about how important the economic questions are in front of them."

Accompanied by her son Hamish, Clark campaigned in the Lower Mainland and southern Vancouver Island Monday.

On a campaign swing through Courtenay, B.C., Dix said he always knew the election would be close.

"If people want change they have to stick together and vote NDP. We want to govern and make things better for B.C. And that's what this election is about."

In Williams Lake, Dix was greeted by a small but enthusiastic crowd at the airport.

"What time is it? It's time for a change," the two dozen people chanted.

Former BC rail supervisor Wayne Potter showed up to greet Dix, saying he's been waiting for more than a decade to see the NDP toss the liberals from office.

"The Liberals devastated everything, including myself," said Potter, adding he suffered a heart attack due partly to the stress of losing his railway job.