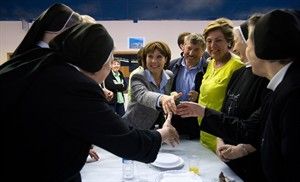 Photo: The Canadian Press. All rights reserved.
B.C. Premier and Liberal Leader Christy Clark greets nuns during a campaign stop at the Mother's Day picnic at the Croatian Pastoral Centre in Richmond, B.C., on Sunday May 12, 2013. British Columbians go to the polls for a provincial election Tuesday. THE CANADIAN PRESS/Darryl Dyck

After a rare morning spent marking Mother's Day with her son and family members, Clark attended a brunch organized by the Immaculate Heart of Mary Croatian Roman Catholic Parish in Richmond.

The Liberal leader received best wishes from the parish priest for another term in office -- and she told reporters she thinks that will happen.

Clark says people are still making up their minds about who they support, and adds she thinks her message about growing the economy is getting through.

On Mother's Day, Clark is reminding voters that her government has promised a child daycare tax credit and $1,200 registered educational savings credit for all B.C. children -- plans a New Democrat government would cancel.

Dix, meanwhile, was speaking at a rally at the Vancouver Film Studio.