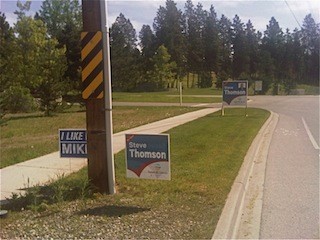 This time it wasn’t the wind or the weather.

Last week, Kelowna RCMP began to investigate after BC Conservative candidate Mike McLoughlin reported dozens of his election signs had been uprooted and stolen in the days leading up to Tuesday’s Provincial election.

In an effort to catch the thief or thieves, McLoughlin took it upon himself to stash a hidden smartphone inside one of the signs and if removed, he would receive an alert and be able to track the phone through its GPS coordinates. After one false alarm caused by Mother Nature, he received another alert Saturday morning when some signs were stolen from Gallagher’s Canyon.

“It was located right between two (Liberal candidate) Steve Thomson signs, and his signs are fine,” says McLoughlin, who placed three signs in the same area, including one that was anchored to a utility pole.

“When I went there (Saturday) morning, the first two were gone – the ones that weren’t anchored – and one of those was the bait sign.” 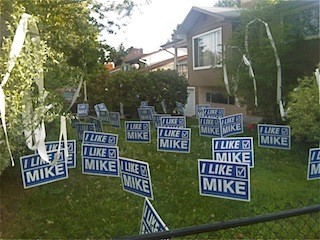 McLoughlin believed the remaining sign contained fingerprints and contacted police with the hopes of finding the culprit, but the situation never went that far as he received a call last night about a home in Rutland.

After some amateur sleuthing, McLoughlin found 40 “I LIKE MIKE” signs in the front yard of a home on Barber Road, along with some balloons and toilet paper draped over the trees.

It turns out the homeowner was named Mike and his friends had celebrated his 40th birthday on Saturday by decorating his yard in the early morning hours.

McLoughlin recovered 40 signs from the property and of the ordeal says, “all's well that ends well in my sign saga.”