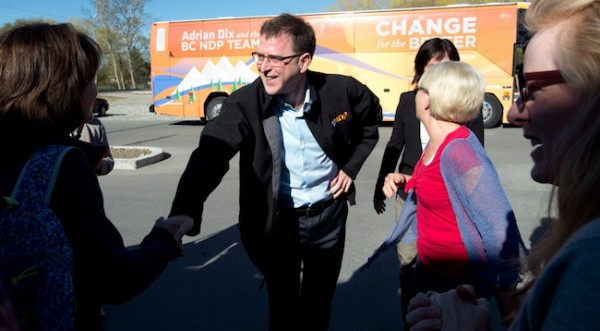 Salmon farming opponents in British Columbia were disappointed with the response they received from NDP Leader Adrian Dix when they tried to make their concerns an election issue.

They presented him with a 68,600-name petition today at a campaign event in Coquitlam calling for the end to what they call the feedlot expansion of fish farming on the province's coast.

Dix accepted the petition, but he did not make any statements about ending salmon farming.

Outside of the campaign hall where Dix was speaking and others were enjoying a pancake breakfast, Gardner says he expected Dix to say he supported their cause, but that didn't happen.

Gardner says the anti-salmon farming lobby wants Dix to take a stronger stand on getting rid of salmon farming.

Dix later told reporters at a news conference that the federal government is largely responsible for salmon farming issues, but if British Columbians want a government that respects and protects the province's coast they should vote NDP.