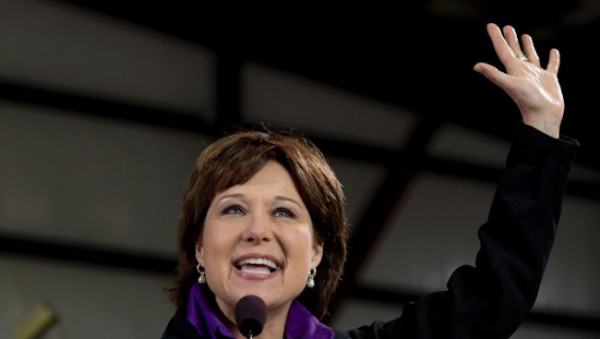 With three days left for campaigning before British Columbians go to the polls, Premier Christy Clark and her incumbent Liberals appear to have narrowed what was deemed by some at the outset as an insurmountable lead by their New Democrat rivals.

Clark said she believes her Liberals are gaining momentum, although Adrian Dix and his New Democrats still appear to have a significant lead in most polls.

Still, clearly buoyed by polling that suggests that what was as much as a 20-point NDP lead four weeks ago has been shaved to single digits, the Liberal leader started her day in a Vancouver Island riding that hasn't sent a Liberal to Victoria in 12 years.

"I think we have a chance to win these ridings, this one for the first time since 2001," Clark said in an airport hangar in Campbell River, where about 200 people came out on a rainy Saturday morning to meet her.

"The momentum that we have is very strong. In my travels of the province what I'm hearing from people is they are deeply concerned about the economy, people understand that this is a stark choice for our province and people understand how important it is they get out and vote."

Clark also received a late campaign boost with an endorsement from the Globe and Mail. An editorial published Saturday concluded the NDP is too risky a choice for BC's economic prospects.

A convoy of logging trucks, semi-trailers and dump trucks greeted Clark in the forestry and fishing town in the North Island riding, where Clark continued to hammer home her relentless message that only the B.C. Liberals can secure the natural resource industry growth that will fuel the provincial economy.

Dillon Orr, 30, parked his Upland Excavating truck among the dozens that lined the route for Clark to show support.

The company is very busy with work on a new regional hospital, an upgrade to BC Hydro's John Hart dam, an expansion at the local airport and two area mines.

"We employ a lot of people here with that kind of stuff," Orr said. "And we've got a lot of work ahead if everything stays the way it is for us."

Clark has been relentless in branding Dix as the death of economic growth in B.C.

Yet while the gap has narrowed, the New Democrat leader maintains a substantial lead according to most polls. The gap between the two was less mid-campaign, but the New Democrats have rebounded and increased their lead once again since then.

Despite what one pollster pits as a nine-point lead, Dix urged supporters not to become complacent.

"They have more television ads, but we have more people," Dix said. "It is close. We don't want to wake up on the 15th and say was there something more we could have done,â€ Dix said in Coquitlam on Saturday.

He urged a continued effort until election day on Tuesday.

"I said at the beginning of this campaign and I've said throughout that the race will tighten up, so if we want to replace the B.C. Liberal government we all have to work together. Every vote counts," he told supporters.

In Abbotsford South, a riding that was held by former Liberal-turned-former Conservative-turned-Independent John van Dongen, the promise of free ice cream gathered about 150 people at a rally where longtime Liberal stalwart Mike de Jong told supporters that the two parties are "now in a statistical dead heat."

De Jong, the Liberal finance minister, explained the math that reduced an estimated six- to nine-point lead to a dead heat with the margin of error, but admitted the Liberals have a long way to go to electoral victory.

"We're not, obviously, taking anything for granted. We've got a lot of work to do and there's no guarantees," de Jong said after a rousing speech to the crowd. "No one is predicting ultimate success here but it does mean that, contrary to what a lot of people were saying four weeks ago, this is a real contest."

In Surrey-Fleetwood, another riding held by the NDP going into the election, a small group of protesters chanted: "No pipeline, save our coast," as Clark spoke.