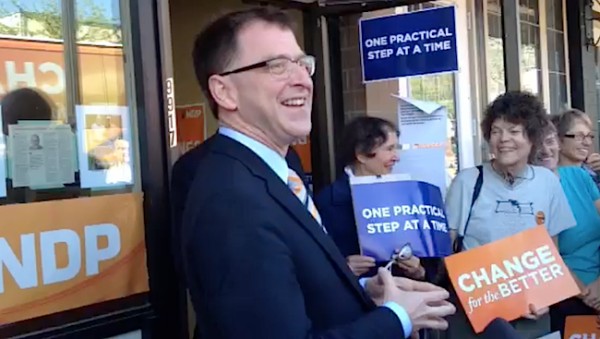 With just days left before BC residents head to the polls, New Democrat Leader Adrian Dix is treading over some well-worn election ground on Vancouver Island.

The NDP holds 10 of 14 seats there, but the area is also fertile territory for Green party votes.

The ad asks who is strong enough to stand up for BC, and says Sterk has clear environmental views, while Dix and the NDP are flip-flopping over the expansion of the Kinder Morgan pipeline.

The ad also points to Clark's five-point position on oil pipelines including environmental assessments and benefits for First Nations and the province.

Dix started his day in the Oak Bay-Gordon Head riding currently held by Liberal Ida Chong and where climate scientist Andrew Weaver is running for the Greens in what's considered a three-way race.

Note to readers: This is a corrected story. An earlier version said the NDP holds seven of 11 seats.