If the first day of voting at advance polls is any indication, a record number of people will mark their "X" prior to Tuesday's BC election. 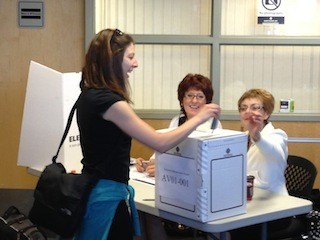 Typically, the turnout for the first day of advance polling is stronger than the next three days.

In the Okanagan, voters in both the Vernon-Monashee and Penticton ridings turned out in droves as about 5 per cent of eligible voters seized the opportunity to cast their ballot in each riding.

The five Okanagan riding broke down this way during voting Wednesday:

In 2009, the first day of advance polling looked like this in the Okanagan.

Figures for Thursday's second day of voting will be available later on Friday.

Advance polls are open today (Friday) and Saturday from 8 a.m until 8 p.m.