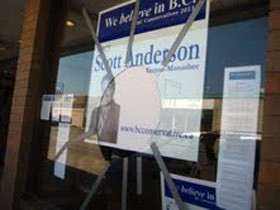 Rocks and baseball bats have replaced campaign promises and candidates forum in the North Okanagan riding of Vernon-Monashee.

Several acts of vandalism over the past several days have marred the campaign.

The latest involved the campaign office of BC Conservative candidate, Scott Anderson where someone tossed a rock through the front window of the office sometime early Thursday morning.

"We've had trouble with vandalized signs in rural areas of the riding," says Anderson.

"But, this is the first time our office has been attacked. The window incident has been reported to the local RCMP Detachment."

Vernon RCMP confirm they have received a complaint, however, no suspect has been identified.

Anderson, in a news release concerning the incident appeared to lay blame on the NDP.

"When there's a race as close as the one between the NDP and the Conservatives in Vernon-Monashee, it's not surprising that we're seen as a threat," says Anderson.

"It's unfortunate that some people feel property damage is more effective than democracy."

Earlier in the week RCMP were notified that a shirtless man with tattoos had taken a baseball bat to several election signs east and west of Lumby along Highway 6. The man was seen with a woman, they were driving a grey Subaru.

RCMP state all three parties were affected, however, Liberal incumbent, Eric Foster seemed to be the main target.

Anderson says all of his signs from Lundy to Cherryville have been stolen while BC Liberal campaign workers state many of their signs in the Okanagan College and OK Landing areas of the riding have also been removed.

Both stated while their signs had been removed, NDP signs remained standing.

Workers within the NDP campaign stated they have been hit hard as well.

RCMP contacted them Wednesday indicating several of Mark Olsen's signs had been vandalized and destroyed.