With the 2013 Provincial election less that one-week away, advance polls have sprung up in many areas around town including the Kelowna International Airport.

Voters will have the opportunity to cast their ballot while either departing from or arriving to the Okanagan and so far the results have been very positive with almost 100 people using the advance polling station before noon on the first day it was open. 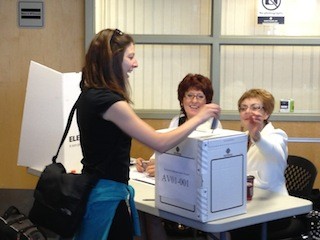 Photo: Contributed
Susan Holtzman casts her ballot at the Kelowna International Airport of May 9, 2013.

“We had about 10 people here before we opened around 7:30 a.m. (on Wednesday) and since then we’ve been very busy,” says Keith Watts, an information officer with Elections BC, assigned to the airport polling station.

The station is part of Kelowna-Lake Country, and workers say in addition to those travellers casting their votes, residents from Winfield and Quail Ridge have stopped by to mark their ballot.

“We didn’t know what to expect, to be quite honest. This is the first time this has ever been done in Canada – either federally or provincially – that we’ve had an airport advance poll,” says Elections BC supervisor Alan Burns, adding they’ve already gotten lots of positive feedback from voters.

Ian Melling stopped to cast his vote before boarding a plane to Europe and says he wouldn’t have been able to without the airport polling station, and called the idea “quite convenient”.

That sentiment was echoed by Susan Holtzman, who found out about the polling station from her father after he flew out of YLW earlier in the day.

“And otherwise I wasn’t going to make it back to Kelowna in time to vote so this is fantastic.”

The airport polling station will be open each day from 8 a.m. – 8 p.m. until Saturday night.