Grits in the homestretch 'a goal down'

The BC Liberal finance minister under the Christy Clark government likens this election race to a hockey game.

"The game is on. I said going into this campaign we were like a team going into the third period four goals down. We've got three of those goals back," says Mike de Jong during a stop in Kelowna to support Liberal candidates Norm Letnick (Kelowna-Lake Country) and Steve Thomson (Kelowna-Mission). 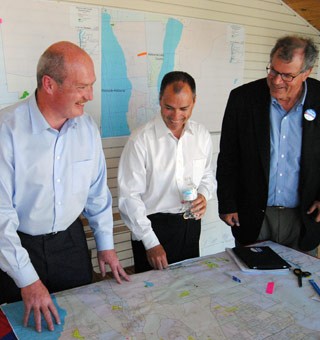 "We're not quite there yet but the excitement you sense on the part of Steve or Norm or any of the campaigns on the BC Liberal side is a real admiration for the job Premier Clark has done and the enthusiasm around the kind of response we're getting."

Starting far behind in the polls, or four goals back, many months prio to the election call was due mainly to a series of scandals and misteps by the current government from BC Rail to the HST and the ethnic vote scandal

"As that distinction has become clearer, as the flip-flo-p around things like Kinder Morgan, a platform that is completely uncosted. Mr. Dix will tell you he is not concerned about balancing the budget, in fact that term never shows up in the NDP platform."

"The clear choice has emerged and British Columbians have finally woken up to the fact they have a choice between Mr. Dix and the NDP who will spend their money, raise their taxes and drive them on a continuous basis into deficit and debt and the approach we have taken, fiscal prudence, balanced budgets and allowing the private sector to create the jobs and empower the economic growth we require," says de Jong.

"The campaign has clarified that. People have become more engaged and reminded themselves how British Columbia performed in the 1990's behind the rest of the country."

de Jong claims the electorate are beginning to realize the NDP are trying to bribe voters with their own money and the cycle of despair that created in the 1990's.

While the deficit has grown through the Liberal's time in office, de Jong stated part of that was through massive losses in revenues in the aftermath of 2008 and 2009.

"If you take the time the NDP was in office, they overspent their own budgeted amount by $7.8B. Over an 11 year period we have underspent by $1.5B," says de Jong.

"A perfect record, no. Comparitively a much better record of responsibly managing the people's finances, yes. You have MLA's here in the valley who have advocated very effectively, very passionately for local infrastructure and we have built. But, we have built within the context of responsible fiscal management."

Letnick stated the difference between the two governments was operating debt versus capital debt.

"When you are looking at our area, you're looking at $1.5B in investment since 2001. That's five times what the NDP invested here in capital infrastructure when they were in power," says Letnick.

"When someone says to me you have all this debt - I ask the question, what don't you want us to have? The bridge, the cardiac surgical unit at the hospital, UBC Okanagan. All these things this government started in 2001."

Letnick claims the only way the Liberals were able to accomplish that was through a strong entrepreneurial economy that attracts investment and people.