BC NDP leader sounds off on attack ad 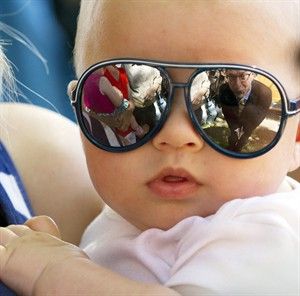 Photo: The Canadian Press. All rights reserved.
B.C. NDP Leader Adrian Dix is reflected in the sunglasses of a baby during a campaign stop in Vernon, B.C., on Wednesday May 8, 2013. British Columbians go to the polls for a provincial election May 14. THE CANADIAN PRESS/Jeff Bassett

Saying there's no "expiry date on ethical behaviour," B.C. Premier Christy Clark has resurrected a sore spot in her NDP rival's political career as the Liberals unveiled another attack ad before the provincial election.

The 90-second ad went out Wednesday, focusing on a quote from last week's televised leaders' debate, when Adrian Dix said he took responsibility for forging a 1998 document to protect his boss, then-premier Glen Clark, but that he was 35 years old at the time.

The memo was written in September 1998, but Dix later admitted that he backdated it to make so it appeared Clark had told him months earlier that he didn't want to be involved a casino licence application involving his contractor.

In the YouTube video, a number of young Liberals say they are under 35 and take responsibility for their actions.

One woman said Dix wasn't taking responsibility at all.

"Trying to get off because you were 35? You were working for a premier that was 38. Was anybody responsible in the 1990s?" she said, referring to the Glen Clark era of government.

The ad angered Dix, who told reporters he's always taken responsibility for his actions, unlike the Liberals.

"It's time for a change and I think if the Liberal party thinks that they can mislead people at the end of a campaign with personal attacks, they're wrong," he said.

"They have driven through every four-way stop to mislead," he said, referring to Liberal Leader Christy Clark's admission during the campaign that she treated a red light as a four-way stop with her young son in the back seat of her.

She told reporters that the 13-year-old incident involving Dix is fair game because he is hiding his party's positions and refusing to say where he wants to take the province.

"When you make a serious mistake like that, when you conceal evidence from the RCMP, I don't know ... that there's an expiry date on ethical behaviour," she said of a police investigation into the casino-licence issue.

I don't think that the date for ethical behaviour starts when you turn 36, I think it starts a lot younger than that."

Canadians have often complained about negative attack ads, but political watchers say they seem to work with voters.

Dix said that unlike the Liberals, he hasn't considered making the election campaign personal.

Dix said the Liberals believe they can win another mandate from the voters by misleading them.

Clark spent the day campaigning in Metro Vancouver, and included a stop in her old hometown of Burnaby to vote in the advance polls. Voters can cast their ballots for candidates in their own riding at any polling station in B.C.

Instead of taking advantage of the usual election-day photo opportunity, Clark said she wanted to get the word out that advance polls are open from Wednesday through to Saturday. Election day is May 14.

Voter turnout in B.C. dropped to an abysmal 51 per cent of eligible voters in the last provincial election in 2009.

Dix had a tougher slog campaigning through the Thompson-Okanagan, an area dominated by Liberal-held ridings.

In Kelowna, a local store manager complained that the Dix campaign team was crowding her store's entrance and a local resident raised concerns about skills training, one of Dix's primary campaign issues.

"We've put on a very determined effort over the last couple of years," he said. "People want a change here. I think this region has been neglected. After just voting Liberal for a time, I think they desperately want change."

But Dix's message for change was lost on the store manager who said the NDP news conference was scaring away customers.

"You are completely blocking traffic for my business," said the manager. "I don't think that's respectful."

NDP campaign officials politely said they would clear the area as quickly as possible.