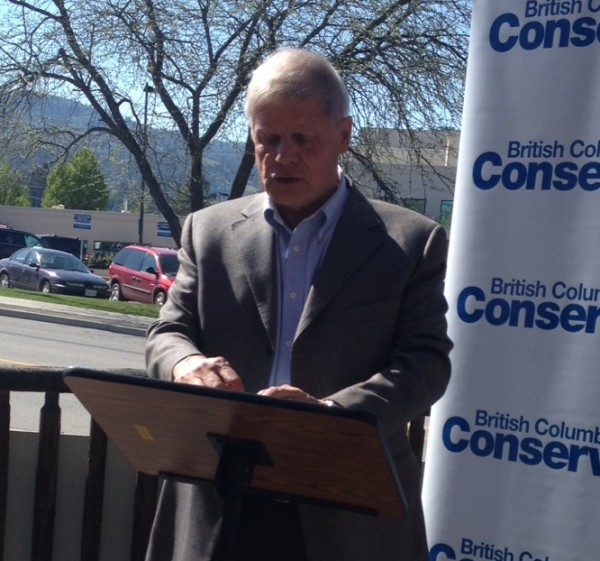 Photo: Deborah Pfeiffer
John Cummins shown in Penticton before he made his trip to Kelowna on Tuesday.

The BC Conservative Party wants booze to be available in convenience stores.

Party leader John Cummins made the announcement in the frozen food aisle at the Glenmore Marketplace IGA in Kelowna Tuesday afternoon.

“We believe in getting BC back to basics, and that means putting more decision making abilities in the hands of local British Columbians,” Cummins stated.

“We’ll make life more convenient and affordable for British Columbians, and help grow the economy by removing restrictions on the sale of beer and wine in convenience stores.”

He says the move would increase convenience and freedom while taking a step towards removing special interests and government interference from liquor sales.

Cummins spent Tuesday in the Okanagan.

Tuesday morning Cummins became the latest party leader to back upgrading of the Penticton Regional Hospital.

BC Liberal leader Christy Clark and NDP leader Adrian Dix made similar pronouncements in the Peach City over the past week.

Cummins will conclude his Okanagan campaign swing Wednesday morning with a policy announcement concerning ranchers in the Vernon-Monashee area.

The announcement will be made at 10 a.m. at the campaign office of Vernon-Monashee candidate Scott Anderson.