BC Conservatives back Pent. hospital

BC Conservative leader John Cummins is the latest politician to commit to rebuilding Penticton Regional Hospital.

Cummins stood at a podium across the street from the aging facility on Tuesday and declared his party’s intention to get the upgrade done. 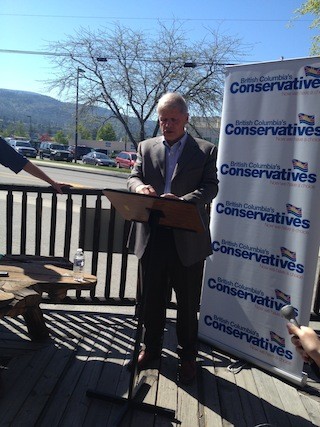 “Penticton hospital is 63-years-old and was built to serve 10,000 people. With its age and the fact that it’s now serving 90,000 people, it’s obvious that it is in need of a serious upgrade,” he said.

“A BC Conservative government would deliver for the people of Penticton, on a project that should have been done long ago.”

On a tour of Britco near the hospital last week, Clark said after a previous visit to the hospital, she had gone back to Victoria and got the business plan for redevelopment started.

On his visit later in the week, NDP leader Adrian Dix said the NDP government has its priorities right and change for the better means the party will upgrade the hospital.

While Clark and Dix came through town accompanied by busloads of journalists, Cummins’ visit was more low key.

He and Sean Upshaw, the BC Conservative candidate in Penticton, still made it clear to the crowd gathered that the  project would move ahead.

“The Liberals have created this health care crisis by doing nothing for years and the NDP platform suggests that they’ve already made too many reckless spending promises to pay for the full rebuild that is required. This is not just a simple upgrade. Our plan would include building the full four story tower, complete with an emergency helipad on the roof,” said Upshaw.

“The BC Conservatives are the only option for people who want to see this care tower built, and I will keep fighting for it until it is done.”

The project is estimated to cost $300 million.

The Regional Hospital District has committed 40 percent  of the funding and the South Okanagan Similkameen Medical Foundation has committed $20 million.

A BC Conservative government will spend $160 million, according to Upshaw.

Doctors who have promoted the hospital upgrade were in attendance.

“This party is the only one who has committed to building the hospital exactly as proposed,” she said. “Our  fear is with the other parities it will get scaled down.”