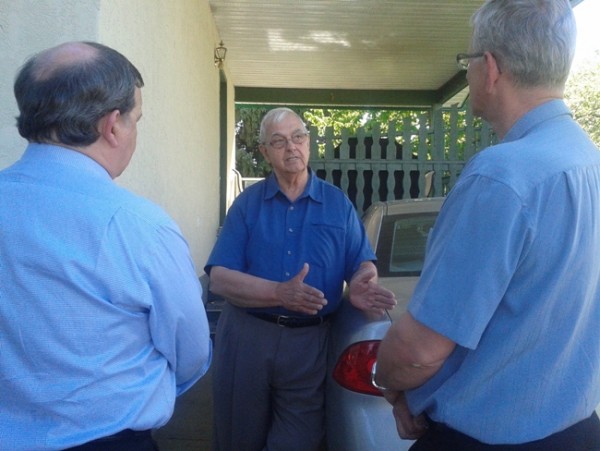 The BC NDP’s labour critic was in Vernon on Monday to lend his support to Mark Olsen’s campaign.

Shane Simpson, NDP candidate and incumbent for the Vancouver-Hastings riding, joined Olsen on Monday evening to talk with members of the community about the party’s plans for the province.

Simpson’s message was loud and clear. He believes that British Columbians have lost confidence in the BC Liberals.

“Increasingly we’re hearing from people that [the Liberals] are tired, they are out of gas, and people are not sure they have confidence in their ability to still lead,” said Simpson.

When asked by one community member about the fast ferries debacle, Simpson agreed the situation was handled poorly all around, but that the debate about the ferries has really come and gone.

“I actually don’t hear much about fast ferries anymore,” said Simpson, adding that when it comes to overspending, the BC Liberals have done their share.

“Should we really have spent over $500 million on the roof of a sports stadium in downtown Vancouver when there are all kinds of places around this province that are looking for health care facilities to be upgraded, or educational upgrades.”

“It’s a question of priorities,” said Simpson. “We’ve had 12 years of the Liberals. People will have to judge [these things] themselves.”

With the recent announcement of $2.2 million in cuts to the local school district and the loss of 19 teaching positions, school district funding is on the minds of voters.

Olsen says there has been $8 million taken out of the public education system in the last five years.

“Those are services to children that are being cut, because of the strangulation from the provincial government on funding. The formula is not working,” said Olsen.

“All of these are areas that affect direct line services,” said Simpson “We’ve made the commitment of an additional $100 million a year directly into [front] line services, with an emphasis on special needs.”

Simpson says the party is hearing from educators and from school districts that, out of 30 children in a classroom, there are three with a special needs designation, but usually several more that also have challenges.

Olsen and Simpson say that kids who have special challenges are not getting the attention they need, nor are the more typical kids able to get time with the teachers.

Olsen explained that the BC Liberal government changed the classification system for special needs students, including those with behaviour problems, which has changed the way that kids receive extra help and funding in the classroom.

Olsen says children with behavioural challenges are not receiving the classroom support they need.

“That’s very disruptive, and there’s no funding for them. Parents need to be aware that this affects the level of every child’s education,” said Olsen.

Olsen and Simpson say that British Columbia is currently seventh in the province for graduation rates, a direct result, they say, of the funding problems that have developed under the BC Liberals.

“They are a government that has run out their shelf life. In the next week, the question in front of people is going to be, do you want four more years of the same, or do you want change for the better,” said Simpson.