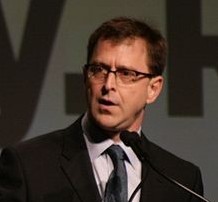 As polls suggest the BC election race is tightening, New Democrat Leader Adrian Dix is becoming more strident in his criticism of the Liberals.

While Dix called Christy Clark's campaign tactics offensive and misleading on Monday, Clark was welcoming some support from Gordon Wilson, a former Liberal leader who jumped ship to the NDP in 1999 before leaving politics.

Dix made his comments while meeting with education workers at a park in suburban Surrey, a valuable region where the NDP and Liberals each hold four seats.

He said the Liberals have turned public education into a wedge issue that has hurt children during the party's 12 years in government.

"This is the discussion we want to have," said Dix, adding the NDP's plans for education include spending $265 million over three years to hire more teachers, education assistants, librarians and counsellors.

He sat at a park bench with Surrey school support workers Claire MacKenzie and Janice Meehan, president of CUPE Local 728. Both say services for special needs children and in classrooms have been cut by at least 18 per cent under the Liberals.

At a news conference following his park meeting, Dix said the Liberals have done nothing during their dozen years in office to help suffering children.

"Eight years leading the country in child poverty and the Liberal party is offering nothing except misleading comments and attacks," he said of the province's child-poverty rate.

But Clark, who was also campaigning south of the Fraser River on Monday, criticized Dix for putting the future of British Columbia's children at risk by planning to run what she said will be a $3-billion budget deficit.

Clark made her comments after meeting with construction workers at the site of the South Fraser Perimeter Road, a four-lane route that would connect the Port Mann Bridge to the Golden Ears Bridge. The project is expected to be completed by December.

Clark said the South Fraser Perimeter Road, as well as projects such as the new Port Mann Bridge, the Evergreen Line and the upgrading of the Trans-Canada Highway near Kicking Horse Pass, are examples of the Liberals' willingness to invest in the province's infrastructure and economy.

She said the NDP failed to make such investments when the party was in power in the 1990s.

"A decade of neglect left our province with deteriorating roads and bottlenecks that compromised safety as well as our economic competitiveness," Clark said.

"Travel times in the Lower Mainland increased significantly over the last five years of the NDP government. They promised it all and delivered nothing and instead, money went into a bloated government when it should be going to roads and bridges."