NDP leader Adrian Dix told a crowd gathered at Penticton Regional Hospital Friday the upgrade at the facility will get done under an NDP government. 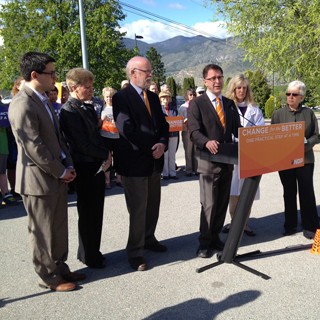 The hospital stop was part of Dix’s tour of the South Okanagan that also included a visit to the Penticton Seniors’ Drop-In Centre Society and visits with candidates Richard Cannings and Sam Hancheroff.

“While Penticton residents were waiting 10 years for their hospital to be upgraded, the BC Liberals found $514 million to put a new roof on BC Place,” said Dix, who claimed he visited the hospital many times as health critic. “An NDP government has its priorities right and change for the better means we will upgrade the Penticton hospital.”

After years of inaction from the BC Liberals, residents and doctors responded by raising funds for a local campaign that culminated in a public meeting in February with more than 800 people attending, he stated.

“In 2009, the BC Liberals promised they wouldn’t bring in the HST, then they brought in the HST,” said Dix. “They’ve been saying for 10 years they would upgrade the Penticton hospital, and they haven’t.

Suddenly just before the election they say they’ll build it. It’s more of the same, say one thing, do another Liberal approach to politics."

Dix praised the efforts of local politicians, among them Summerland Mayor Janice Perrino, in bringing the upgrade to the hospital.

In addition, Dix said an NDP government will improve health care services in other ways for Penticton area residents.

Dix’s stop at the hospital, followed a visit two days ago by Premier Christy Clark. She toured Britco, a business across the street, and touted a strong economy.

On that tour she stated after hearing concerns on a visit to the facility, she went back to Victoria and got the business plan for redevelopment started.

She added the NDP will cancel plans for the hospital and bring fewer jobs and higher taxes.

The hospital has become a hot issue leading up to the election, with both candidates stating it will get built.

Dr. Susan Tebbutt, who was in attendance Friday morning, said she hopes that will be the case.

“We are very happy to have him come and discuss the hospital, and it seems there is a commitment to build it,” she said. “Obviously we want a firm timeline for when it will be built and the concern is the exact project we spent 10 years planning for will be scaled back, and we can’t have it scaled back.”