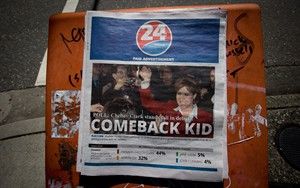 Photo: The Canadian Press. All rights reserved.
A copy of the free newspaper 24 Hours Vancouver displaying a front page B.C. Liberal Party advertisement with leader and Premier Christy Clark bearing a similarity to a regular news page, is seen in Vancouver, B.C., on Wednesday May 1, 2013. THE CANADIAN PRESS/Darryl Dyck

An ad taking up the entire front page of the Vancouver edition of 24 Hours calling Liberal Leader Christy Clark the "comeback kid" is being brushed aside by her chief rival.

NDP leader Adrian Dix says he will leave others to judge the ad, but he says he thinks political parties should not be spending money on "creating illusions" around a story.

The ad, placed on the front page of the free daily, shows a photo of a triumphant Clark underneath the words "paid advertisement" and it also shows poll figures that indicate Clark is perceived to have sounded most like a premier during the televised leaders debate earlier this week.

The full poll by Ipsos Reid is not referenced in the newspaper ad, but it isn't as flattering as the ad would suggest.

Clark says the front page ad was for sale and her party bought it, adding the fact that it's advertising is clearly marked on the page.