Premier Christy Clark praised the hard work being done by Britco staff, during a whirlwind tour of the Penticton business Wednesday morning. 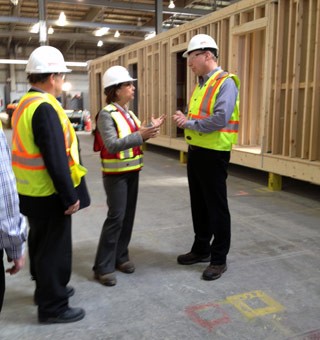 The visit to Britco was one stop on her busy agenda, that included stopping by Liberal candidate Linda Larson’s office in Oliver, Sanderson Fruit Stand in Keremeos and the Copper Mountain Mine in Princeton.

“This is proof, government spending and infrastructure does create jobs,” she said,  as she walked through Britco, with a strong media contingent and employees of the business.

Clark was initially welcomed by Chris Gardner, executive vice president of the company, who provided statistics on its success.

Among them that Britco is one of the largest modular construction companies in the world, with more than 1,000 employees, including 500 in BC, 100 in Alberta, 130 in Texas and 400 in Australia.

The Penticton facility was established in 2005 with approximately 30 employees. It has since grown to around 170 employees, making it one of the largest public sector employers in the area.

“We are delighted today to host the premier and Dan Ashton,” said Gardner. “Our growth has been terrific and we appreciate the support from them.”

During the tour, Clark, clad in a hard hat, safety glasses and vest,  was invited to walk into modular buildings under construction,  try her hand with a drill and visit with the staff. 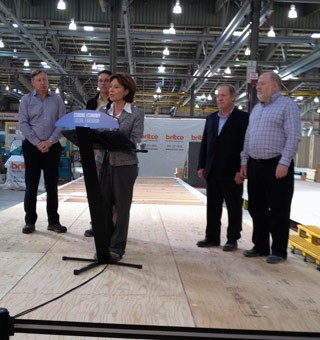 At the podium following the tour, she told employees, they should be so proud of what they are doing here and described the facility as a fantastic success story.

“We need to say yes to economic development,” she said. “Driving growth in the resource sector is what created opportunities for people, like your Britco.”

She praised Ashton, the Liberal candidate for the Penticton riding, for his work as mayor, saying under his leadership Penticton has set an example for everyone in the country, by breaking the borrow, tax and spend cycle.

“Today Dan and I are here together on a shared mission of recognizing we need to grow the economy,” she said. “I am so proud to have him on my team.”

When asked about the status of the Penticton Regional Hospital, across the street from Britco, Clark said after hearing concerns on a visit, she went back to Victoria and got the business plan for redevelopment started.

It is an effort that will continue until there are shovels in the ground, she claimed

“It badly needs to be done and that is the first part of having all our ducks in a row,” she said. “I got the gum out of the system.”

She added the NDP will cancel plans for the hospital and bring fewer jobs and higher taxes.

“The NDP is a danger to our economy, because families need stability,” she said. “The people here in Penticton depend on government to say yes to economic opportunity.”

She further touched on NDP leader Adrian Dix’s stand on photo radar and controversy with a Caribou candidate misrepresenting herself.

Dix was slated to spend the day in the Caribou region.

Raw video of Clark on the job at the work site.