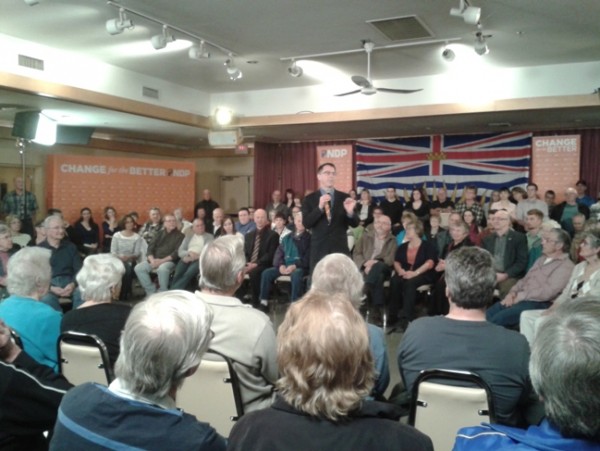 BC NDP leader, Adrian Dix, was at the Schubert Centre in Vernon on Sunday night for a town hall campaign event.

Dix addressed a crowd of more than 150 supporters, pledging “Change for the Better” if the BC NDP are voted into power in the upcoming provincial election.

In a provincial election campaign that has been wrought with accusations from the BC Liberals that the NDP will increase taxes to pay for their overspending, Dix emphasized that spending promises would be backed up by full cost accounting.

“We’ve made, in this election campaign, a number of commitments. The first is this. Every time we say we’re going to spend your money, we say where the money will come from.”

One of the NDP’s key campaign promises has been to reinvigorate forestry. Dix said his party would address forest health issues in BC by creating a true inventory of forest resources, and by investing in silviculture.

“We focus on things that matter to people. Forestry remains a very significant part of this region.”

“We are going to increase the number of spaces in apprenticeship programs because every time we meet with a business in BC, they say there is a skills shortage we need to address, and we’re facing therefore a future of jobs without people.”

“Everybody knows that education is more important than it’s ever been.”

“If you don’t have money at 18, that shouldn’t stop you from having opportunity in the future. It’s bad for our economy, and it’s bad for all of us if people are denied opportunity because they’re not wealthy.”

He also said BC has had the worst child poverty over the last 9 years of all other jurisdictions in the country, and that BC has the highest rates of inequality.

“Focusing on children from zero to five (years), especially those living in the worst poverty, doesn’t bring you votes but it brings a better society, a better economy, and more opportunity.”

Dix concluded his speech to supporters by sharing his thoughts about a need for more integrity in politics.

“For 18 months, the Liberal Party and its allies have run the most aggressive personal attack ads against me this province has ever seen against a politician,” Dix said, adding that the NDP has never retaliated.

He pointed to the low voter turnout rate and said he felt that people are rejecting the political process, in part, because of mudslinging. Indeed, the 2009 provincial election hovered around the 50 per cent mark for voter turnout, an eight point decrease from 2005.

“Of course we have disagreements with the Liberal Party,” said Dix. “I don’t think it serves anybody’s purpose to run people down personally even if we disagree with them politically."

"There are real differences. We think it’s time for a change.”