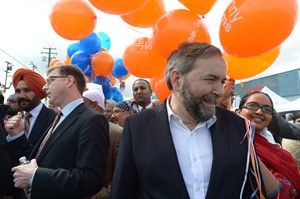 The BC Liberals demanded the NDP fire its provincial secretary over letters the Liberals say amount to a "shakedown" of Liberal party supporters.

But NDP Leader Adrian Dix said the party has done nothing wrong by approaching people who have given the Liberals support in the past.

The Liberals say they have obtained letters sent by the NDP that show the party has specifically approached Liberal supporters to ask for contributions for New Democrats.

The letters request supporters "make a contribution in the range of $5,000 now to show your commitment to a balanced approach to government, the Liberals state.

Finance Minister Mike de Jong said in a statement the letters amount to "nothing more than a low-down shakedown."

"This is a pressure tactic by the NDP to virtually blackmail businesses across BC into donating to their party," de Jong's statement said.

"It is unacceptable, and I am calling on Adrian Dix to accept responsibility for the letters and fire Jan O'Brien, the author of the shakedown letter and the NDP's provincial secretary."

The Liberals declined to release the letters, saying the people who received them do not want to be identified.

At a campaign stop Saturday afternoon, Dix said the NDP has done nothing wrong and he categorically denied his people are trying to strong-arm Liberal supporters into donating to his party, widely considered to be the runaway victor in the May 14 election.

He did not deny that the NDP has approached Liberal supporters.

"The Liberal party raises the vast majority of its money from corporations and certainly, we've sought to raise some and had some success before," Dix said.

"But if anyone is concerned about it I would be happy to talk to them because there is absolutely, absolutely no intent as suggested by the Liberal party or others."

Dix noted he has pledged to end political donations by unions and corporations should he become premier, and urged the Liberals to get behind the idea.

"The reality is we are certainly not demanding anything. We are seeking contributions, as you know, to support the campaign."

When Dix announced his party would end corporate and union donations last week, the Liberals refused to endorse it.

The Liberals are the only major player left in BC politics that objects to an outright ban of corporate and union donations, a stance Liberal cabinet minister and spokeswoman Mary Polak attributed to the party's "straightforward'' attitude.