BC NDP leader Adrian Dix proposed changes on Friday that he says will reduce child poverty and inequality. 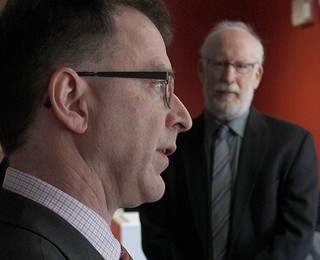 New Democrats will make a $210 million investment in a BC Family Bonus Program, to make life easier for families struggling to make ends meet under the BC Liberals. This new program will provide up to $829 for each child under age 18 and will bring more than 8,000 children out of poverty.

Penticton NDP candidate, Richard Cannings, welcomed this practical step to tackle the problem of inequality in BC.

“One-in-ten children in BC live in poverty,” said Cannings. “We are a province with tremendous advantages and opportunities and yet so many children are hampered in life because of the circumstances into which they are born.”

The BC NDP announced additional plans to help reduce inequality and child poverty, including:

The NDP say that Mary Ellen Turpel-Lafond, independent children’s advocate, on numerous occasions has pointed out weaknesses in how we care for disadvantaged children in BC.

“These changes will finally help to protect some of the most vulnerable people in our society, and improve equality of opportunity in this province,” said Cannings. “For too long, disadvantaged children have been abandoned by the BC Liberals.”