Northern BC on Tory agenda

The BC Conservatives announced Thursday their plan to create a three-year, $50 million grant program to support recreation, arts and culture in Northern British Columbia. 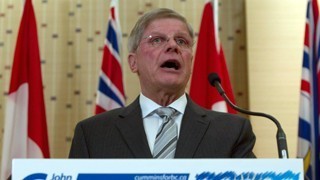 "The BC Conservative vision for the North is about supporting a stronger economy while investing our prosperity to create a higher quality of life and community spirit for Northern communities," said John Cummins, leader of the BC Conservatives.

Dan Brooks, BC Conservative candidate in Nechako Lakes applauded his party's commitment to improving quality of life in Northern BC, saying, "Without a thriving economy, we can't afford to improve our quality of life or invest in recreation and culture. Without a high quality of life, we can't attract a workforce for our economy or build a sense of pride in our communities."

The Conservatives say local governments and families know best how to enhance their communities. This program would be accessed by community organizations with an aim to enhance their local community. The grants would be delivered through the local municipalities.

The program will be funded by the new expenditures outlined in the BC Conservatives' fully costed fiscal framework document.