Van Ryswyk: In it to win 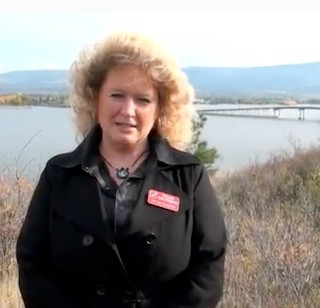 The embattled former NDP candidate in the Kelowna-Mission riding is running as an independent.

Van Ryswyk was asked to step down by the NDP just moments after the election writ was dropped Tuesday when comments she made on the Castanet forum four years ago, labeled racist by the BC Liberals, were released to the media.

The comments pertained to First Nation and French issues.

While Van Ryswyk says the snippets released by the Liberals were taken out of context, she stands behind the comments taken in their totality.

"(My intent) has always been that people be treated equally and fairly. That's huge to me because I have spent my whole life building up a reputation and I have a very good reputation or, at least I did until Tuesday. In one fell swoop, I have a vindictive Ministry of Transportation trying to get back at me because I held them accountable very publically."

Van Ryswyk explained the meaning behind her posts to Castanet after announcing she would run as an independent.

"What I said about natives and not paying land claims - that was in reference to the fact that these issues should have been addressed a long time ago. We shouldn't still be paying for it now as in, if we had to pay anything it should have done it a long time ago and we should be moving on and saving some of our heritage and working together and being one people. That's what I was talking about and that's what I said in my posting. Of course, that didn't translate into what was put out there.

Do I still feel that way? Yes. I don't feel First Nation land claims have been addressed effectively. I think they have been disrespected and I think that needs to be addressed. Until that happens, Canada is going to be divided.

The conversation needs to happen.

My conversation was on equality but now I've been turned into a racist."

And, concerning the French Canadian posts.

"The French Canadian comments was due to the Olympics. On that posting a lot of people made comments on French being first and there were a lot of people who were French commenting that there was not enough French.

Again, me being a person I am where I think everyone should be treated fairly and the same I am looking at, in Quebec, English signs are illegal and, in yet, anywhere in BC or the west it isn't illegal to have a French sign. Why the inequality. That's what the comment was on.

I didn't obviously translate that very well. I didn't say it very eloquently. It didn't come out very well and I apologize for that."

Van Ryswyk says the support she has received from people, not only in the Okanagan but across Canada, has been overwhelming and led to her decision to stay in the race as an independent.

She says the other candidates are in for a fight.

"I think that was a huge mistake for them because all they have done is made me a martyr," says Van Ryswyk.

"Running as an independent - now I don't have to filter what I say because it's not party policy. I can say what I want to say and address issues maybe people are afraid to address and I don't have to worry about not following policy."

Van Ryswyk adds the controversy has helped - not hindered her candidacy.

"The person I have always been is a very vocal, straight forward, no nonsense type of person. That's why a lot of people asked me to run in the first place because they said 'you would be the perfect person in there because you will hold everybody accountable,'" says Van Ryswyk.

Letters to the Editor to Castanet overwhelmingly support Van Ryswyk's statements calling her decision to speak her mind 'refreshing' for a political candidate.

A Castanet poll suggested three out of four people agree with her comments and a second poll indicates wide-sweeping support in the riding.

Here is the Castanet poll: