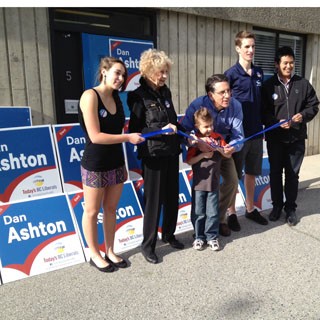 Residents, business people and city officials partied in the park for the official opening of Dan Ashton’s campaign office in Penticton on Tuesday.

Ashton, who is taking a leave of absence from his duties as mayor and regional board chair, is the BC Liberal candidate for the Penticton riding.

His new office during the campaign leading up to the May 14 election is at 1101 Main Street.

Ashton said if elected his number one priority will be to complete the upgrade to Penticton Regional Hospital.

“The premier came here and announced a business plan,” he said. “That is the first step in the right direction for getting it constructed, and I will ensure that is going to happen.”

Ashton further praised what the Liberals have done in the province from major road improvements in Summerland to a new Okanagan College and schools in Penticton and Centennial Walkway and old school revitalization in Peachland.

Those in attendance discussed his accomplishments as mayor and regional district chair including right-sizing the operations at city hall and the district to fit today’s economy and delivering three years  of zero percent tax increases in the city.

“I’ve known Dan for years and years, and I think he has done a good job as mayor and knows the government and how it works,” said former MLA Jim Hewitt.

Ashton will open his campaign office in Peachland on Wednesday and an office in Summerland on Thursday.