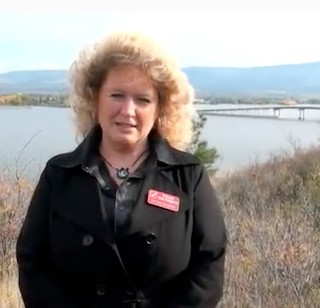 "Earlier today, I was made aware of unacceptable comments made by Kelowna-Mission NDP candidate Dayleen Van Ryswyk.  I have accepted Ms. Van Ryswyk’s resignation.  A new BC NDP candidate will be announced shortly."

Van Ryswyk was facing a storm of controversy after posts she made on Castanet forums were brought forward.

“Ms. Van Ryswyk has made unacceptable and hateful statements against First Nations and French speaking Canadians. There is no place in British Columbia for that type of language,” said Polak. “Adrian Dix should immediately terminate her nomination.”

On the Castanet community blog, Ms. Van Ryswyk has made a number of comments that are clearly unacceptable to British Columbians.

In a discussion thread titled ‘Strip them of the Status Card,’ Ms. Ryswyk wrote:

“It’s not the status cards, it’s the fact that we have been paying out of the nose for generations for something that isn’t our doing. If their ancestors sold out too cheap it’s not my fault and i shouldn’t have to be paying for any mistake or whatever you want to call it from MY hard earned money.”

“It’s time our generation stopped paying for the mistakes of the past…let us all be one people…THE SAME.. race, creed colour or gender shouldn’t matter anymore in this day and age…enough is enough already.” (sic)

“The government is nothing more than a big black hole that feeds off the working man, sucking his last penny from his hand so they can give it away freely or lose it stupidly on things like fast ferries and about a zillion other stupid things.”

“In my opinion, we have paid our debt…a thousand fold..it’s time to move on, heal and grow. If the native people are to be the proud nation they keep talking about, then stand on your two feet and hold your heads high. There are a lot of things to be proud of, stop dwelling on the past. Because like the economy…the gravy train bubble will eventually burst too.” (sic)

“I’m getting so sick of having french stuffed down my throat…this isn’t Quebec…it’s western Canada…we speak english here….why are we forced to have it at our western Canadian hosted Olympics?” (sic)

“Clearly, these remarks are not becoming a potential member of the Legislative Assembly of British Columbia,” said Polak. “Adrian Dix should never have signed her nomination papers with these kinds of beliefs, but now that he has, he has no choice but to immediately fire her.”