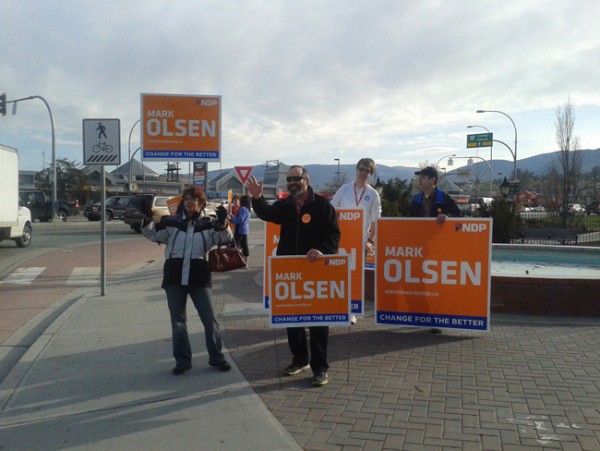 NDP candidate for Vernon-Monashee, Mark Olsen, kicked off his election campaign this morning amidst a crowd of enthusiastic supporters.

The group gathered with signs in hand at the bottom of hospital hill in Vernon to wave at passers-by and rev up community support for Olsen’s campaign.

Olsen says he’s looking forward to a great campaign. “This is an opportunity for everybody in BC to enact change. [NDP] priorities and BC’s priorities are the same.  We want to focus on getting people trained up for the jobs of the future.”

Provincial NDP leader, Adrian Dix, has rolled out a five-point plan for forestry. Olsen sees it as a blueprint for a strong future for the forest industry in Vernon.

“We’re trying to reinvigorate the forest industry. We just came out with a forest renewal plan that includes reforestation, protection of our land base, and assistance for workers in case there is another downturn. We’ll have a jobs commissioner that will help and assist people getting back to work.”

Since 2001, the BC Forest Service has been cut by over 1,000 positions, representing a quarter of its workforce. There are also concerns in the industry that existing management practices are not sufficient to sustain a healthy timber supply in the province.

Dix and the NDP intend to increase forestry and forest health funding by $100 million annually over the next five years.

Both Eric Foster and Scott Anderson, Vernon-Monashee candidates for the BC Liberals and the BC Conservatives respectively, have stated they are concerned about a provincial deficit under an NDP government.

Olsen responded to criticisms of the NDP’s planned budget.

“The Liberals are already running deficits. Their budget is based on the sale of assets. Assets are not revenue. For them to say they have a balanced budget, we have shown there’s an $800 million deficit in their current budget.”

Olsen went to say, “We’re going to be focusing on what’s important to people in British Columbia.”