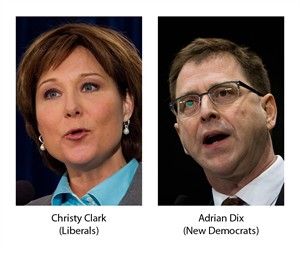 British Columbia's election campaign officially starts today with Premier Christy Clark visiting Lt.-Gov. Judith Guichon for formal permission to launch a race that in practice, has been going on for months.

Election campaigns are fluid events that can shift and change in moments despite the best efforts of party machines, but going into Tuesday's campaign, party officials and political experts put the economy, leadership and credibility among the top issues in the May 14 vote.

Clark's Liberals are seeking their fourth consecutive mandate, but enter this campaign behind the NDP who have spent the last 12 years in the opposition ranks.

The New Democrats have chosen "Change for the Better, One Practical Step at a Time" as their slogan, an effort to signal what they consider their moderate, but determined approach to bringing economic and social change.

The Liberals are running on the theme "Strong Economy. Secure Tomorrow," what they hope will be a robust endorsement of the Liberal legacy of economic prosperity.

"The economy. The economy. And the economy," said former Chilliwack Liberal MLA John Les said in summarizing the party's message. "I don't think you can over-emphasize that. We have to keep a very strong focus on our economic performance."

Clark has focused on long-term debt reduction strategies since her February throne speech where she suggested the province's potential windfall from plans to export liquefied natural gas from BC to Asia could produce revenues that allow the province to pay down the debt and eliminate the provincial sales tax. But it will take more than 15 years.

But author and former Liberal adviser Martyn Brown says the Liberals can't expect to own their traditional labels as debt fighters and economic managers in this campaign because NDP Leader Adrian Dix has shrewdly pulled his party to the centre.

Brown said he believes the long-standing tradition in British Columbia that has permitted the free-enterprise governments to assert their ability to manage economies may not be a weapon the Liberals can count on in this election.

"An awful lot of that is deep in British Columbia's political culture and reflected the fundamental differences in spending and taxing priorities in years gone by," he said. "That doesn't exist anymore. The tax plan the NDP have tabled is not much different than what the government has tabled."

Both the Liberals and NDP have said they are prepared to raise corporate taxes and income taxes for the wealthy are also set to go up.

Brown said public opinion polls are suggesting the edge the Liberals have had on perceived public confidence in managing the economy and budgets has declined.

University of Victoria political science Prof. James Lawson said the New Democrats have been preparing to battle the Liberals on the economic front in this campaign. Dix signalled more than a year ago his plans to tax banks to raise funds for student loans and increase corporate and income taxes for income above $150,000.

"That's really palpable that they have gone out of their way to get people to relax," he said. "The instrumental side of that is pretty obvious, they need to innoculate themselves against attack ads that will draw on the classic thing in this province about the socialist hordes."

Lawson said the NDP has been overly cautious with economic messaging heading into the campaign.

"I don't see a lot of backbench MLA's coming out in favour of socializing the economy," he said.

Brown said Clark's pre-campaign television broadcast saw her demonstrate her formidable skills as a communicator, but she enters the campaign behind in the polls and facing a battle-hardened NDP leader who publicly has been trying to suppress NDP expectations that there will be gold at the end of the rainbow for the New Democrats.

"What he's done is he's positioned himself expertly in terms of a thoughtful, serious and compelling and less partisan, less polarizing figure than any NDP leader before him," said Brown.

Les said he worked with Clark for two years and found her to be an inclusive person "who put a very clear focus on the economy and resource development."

"She took over at a very difficult time, with the HST mess still being resolved, and she took over another leader's (former premier Gordon Campbell) caucus, which is not a very easy thing to do," he said.

But Les said the NDP has their own credibility issues, including Dix's "ethical lapses."

Les said Dix's decision to back-date a memo for former NDP premier Glen Clark in the 1990s will be played out during the campaign.

Dix was working as Clark's chief of staff when he admitted changing the date on a memo to shield Clark from a gaming scandal that eventually forced him to resign.

Dix lost his job with the Clark government and has called the incident a mistake.