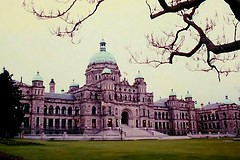 I am very disappointed.

You may recall that, three weeks ago, I wrote a column about the B.C. Government’s new proposal on how to deal with traffic ticket disputes: Bill 52 – Big Changes Coming.

Bill 52 is completely misguided and may not pass constitutional scrutiny, which could end up costing B.C. taxpayers a lot of money if the process has to be changed.

Possibly more frustrating/disappointing than Bill 52 is Bill 44, which also passed 3rd reading last week. To me, Bill 44 is equally as…misguided.

I encourage you to read Bill 44 - The Civil Resolution and Tribunal Act at the following link: Bill 44.

So, what does Bill 44 propose?

Well, put simply, Bill 44 seeks to create “Civil Resolution Tribunals” that will run side-by-side with B.C. Courts. The Tribunals will have jurisdiction to hear and decide cases that fall within the jurisdiction of B.C. Small Claims Court. It is, according to the B.C. Government, intended to save money.

I understand that this may sound strange, so I’ll put it another way.

At present, if you have a dispute with someone (typically for claims under $25,000), you can go to Small Claims Court. Small Claims Court is much more informal, streamlined, and user-friendly (than traditional court), allowing people to represent themselves (which often occurs). With that said, people are still allowed to hire lawyers. The hearing/trial is presided over by a provincial court judge who is neutral and independent from government. This sounds like a good process, right?

Under Bill 44, parties could (if they consent, for now) have their potential Small Claims case taken away from the court system and heard in front of a Tribunal, a non-judicial group. In this process, the parties must represent themselves; lawyers are not allowed...

At section 20, Bill 44 states that, as its default position, lawyers are not allowed. If you want to hire a lawyer, you have to satisfy the Tribunal that a lawyer is required.

It isn’t hard to imagine that some people will be unfairly advantaged. For instance, some people are more familiar with presenting an argument, such as those people who work in business or insurance. Is this fair? I certainly don’t think so.

It is disheartening that the B.C. Government did NOT consult with those groups who have the most expertise in this area when creating this Bill. As you can imagine, this Bill isn’t well supported (and is opposed) by some of those groups. Consider the media release from the Canadian Bar Association (B.C. Branch): CBA Media Release.

It is also disheartening that the B.C. Government pushed through this Bill (as well as Bill 52) BEFORE hearing the results of a report on B.C.’s shortcomings in the justice system.

For those who don’t know, in February 2012, the B.C. Government appointed a very well respected lawyer, Mr. Geoffrey Cowper, Q.C., to head a critical review (and draft a final report) of B.C. justice system: Justice Review. The Government would then use that report to make changes (and improve our system). The final report will be made to the Government in July 2012.

Why create an alternative process in which people are not represented by lawyers and decisions are made by people without judicial training? Why funnel much needed resources away from the current court system and why not address the judge shortage? Why not just ‘tinker’ with the existing Small Claims Court process (if there are problems)? And why is the Government specifically excluded?

Whether or not you agree with the changes, I am hopeful that you will think about and consider the changes for yourself (without blindly relying to any particular source). I have done this and I am very disappointed in our Government.

**The information contained in this column should not be treated by readers as legal advice and should not be relied on without detailed legal counsel being sought.

Jeff Zilkowsky is a lawyer practicing at MacLean Law in the Lower Mainland and in Kelowna, and focuses his practice on family law and litigation.

In his column, Jeff provides information about current legal events or points of interest or concern relating to the law.

The information contained in Jeff’s column should not be used or relied upon as legal advice.

Comments are always appreciated and encouraged, so don’t hesitate to email Jeff at [email protected].