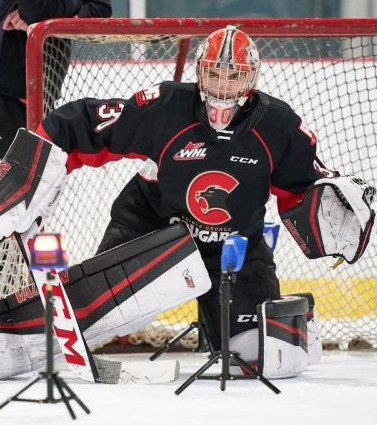 NHL draft prospect understands pressure-packed situations in the crease, off the ice.

Backlund leads Rockets into next round

Wayne Moore - Apr 14, 2009 / 5:00 am | Story: 46289
With all due respect to the likes of Jamie Benn, Evander Kane, Drayson Bowman and Brayden Schenn, Mikael Backlund is the most dynamic, electrifying and dominant player right now in the Western Hockey League.

Backlund, like no other player, has the ability to bring a crowd to its feet every time he touches the puck.

When the puck finds his stick, as it does whenever he steps on the ice, magical things tend to happen.

The 20-year-old native of Vasteras, Sweden has just five goals and three assists in seven playoff games, but it's the timing of those goals and the dimension he brings which make special.

Injuries late in the regular season and early in the playoffs kept Backlund out of all but four periods of the Rockets first five playoff games.

He returned from a lower body injury in game two of the second round series against Tri-City and began rolling in game three, coincidentally, the same time the Rockets began to roll.

Seven of his eight points and all five goals have come during the last four games, all victories.

Each goal has come at a key point in the game. In the first two games in Kelowna, he scored the opening goal of the game. In game five in Tri-City, Backlund scored a crucial goal early in the third to get the Rockets up 4-1.

In Sunday's series clinching game, his first tally of the night tied the game at 1-1, his second, a magnificent shorthanded effort, put the Rockets up 4-2, just three minutes after the Americans had closed the deficit to one.

"That's why he's a first round pick. That's why the Flames picked him and that's why we are very fortunate to have him right now," Rockets head coach Ryan Huska commented after Sunday's series clinching win over Tri-City.

"Our challenge with Mike is to make sure he does it all the time and he has to challenge himself to push all the time. I think when he does that, you see efforts like tonight when he's a special player."

Backlund also brings with him an emotional component.

The back-and-forth taunting between Backlund and Tri-City net minder Chet Pickard became evident in the latter stages of overtime in game four when Pickard gave Backlund some smack after making a superb save in overtime.

Backlund gave it right back after Jamie Benn scored the winner moments. He pushed Pickard's buttons again Sunday, pointing at the Tri-City net minder after putting home a rebound that evened the score at 1-1.

His after goal celebrations are reminiscent of Washington Capital sniper, Alex Ovechkin.

"Kelowna is kind of a stepping stone for him to go to the NHL, most likely next year. The things the kid does on the ice are just unbelievable," says Rocket rookie, Curt Gogol.

"It's great to watch him out there."

Backlund's game isn't all about offense. He is also responsible at the defensive end of the ice and is one of the best players in the league at picking an opponents pocket, stealing the puck and going the other way.

After a well deserved day off, Backlund and the Rockets return to the ice Tuesday to begin preparations for the Western Conference final.

They'll likely be glued to the television Tuesday night, watching with anticipation as the Vancouver Giants and Spokane Chiefs battle in game seven of their series.

The winner will face the Rockets in the West final.

While the Rockets won't say publicly who they would prefer to face, Huska did say it's always nice to have home ice advantage in a playoff series. That is possible only if the Chiefs were to be victorious Tuesday in Vancouver.

Playoff tickets for the Western Conference final go on sale Wednesday morning at Select Your Tickets.