Five years after landing in Whistler, ‘Man at the Airport’ Hassan Al Kontar is a Canadian citizen 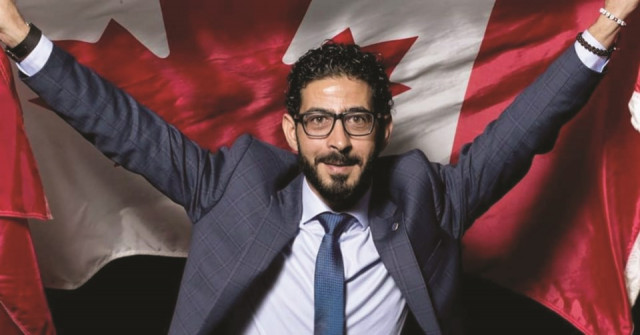 On Jan. 11, Hassan Al Kontar officially became Canada’s newest citizen, but the process of becoming Canadian began long before that for the Syrian refugee.

Al Kontar made international headlines in 2018 after he was stranded, a man without a country, in a Malaysian airport for months on end. Refusing compulsory military service in his native Syria, Al Kontar’s odyssey began in 2011, when the insurance marketing manager lost his work permit from the United Arab Emirates after a devastating civil war broke out that continues in Syria to this day. It left him scrambling to find a country that would issue him a visa so he would not have to return to his war-torn homeland. For years, he slept in his car or hid out in parks.

Then, in March 2018, he was turned away from a Turkish Airlines flight, causing his three-month Malaysian work permit to expire and leaving him stranded in the Kuala Lumpur International Airport. It was there that he began documenting his travails on social media, with both pathos and humour, captivating a global audience that seemed to resonate with his story and its shades of the 2004 Tom Hanks film, Terminal. He would later spend several months in a Malaysian detention centre after authorities there arrested him inside the airport and threatened him daily with deportation, which would likely have meant certain death for a Syrian who is a vocal critic of Bashar al-Assad’s brutal autocratic regime.

From there, Al Kontar caught the attention of former Whistlerite Laurie Cooper, founder of Canada Caring, a non-profit dedicated to placing volunteers in refugee camps, who was inspired to help bring the Syrian refugee to Canada. Cooper, along with a group of fellow Whistlerites, organized a letter-writing and fundraising campaign, which convinced an Ontario refugee lawyer to donate his services pro bono, and the BC Muslim Association to offer one of its sponsorship spots.

“I am very, very happy for him and I think he will enrich Canada and that will reflect positively on the refugees to Canada,” said Shawkat Hasan, director of the BC Muslim Association’s refugee sponsorship program.

Cooper, who now lives in Smithers and works as a refugee immigration consultant, said she felt like she gained another son the moment Al Kontar arrived in Canada.

“I remember someone asked me how I felt about him arriving and I said I felt like my son had come home,” she said. “I say that with great respect for Hassan’s mom, because I’m not his real mom, but I’m grateful I’ve had the opportunity to be in a certain kind of maternal role for him and others that have arrived because many have not seen their mothers for years and years.”

That is due to change soon, however. With a passport in hand, Al Kontar is hopeful to travel to Egypt, where his family now resides, a trip that is a decade-and-a-half in the making.

“I think it will be amazing. It will be a dream come true, but it comes with a cost because we missed 15 years,” he said, adding that his eventual goal is to bring his family to Canada. “We will try to make up for all the lost years.”

Al Kontar has kept busy since landing in Whistler (he now lives in Vancouver) nearly five years ago. A fierce advocate for refugees around the globe, he’s a regular on the speaking tour circuit, released his debut memoir, Man at the Airport: How Social Media Saved My Life, last year, and joined the Canadian Red Cross Emergency Disaster & Response Team, which brought him to COVID-19 vaccine clinics from Vancouver to Fort St. John. Forty-eight online courses later, and he is now a case manager on the Red Cross flood recovery team, overseeing remediation activity in Princeton.

“I can easily claim I’ve seen more of B.C. than most people from British Columbia,” he said.

Al Kontar’s tireless work ethic is driven in part by a promise he made to a CBC journalist on his first day in Canada back in 2018.

“I was speaking to the Canadian people that I will prove them right for the opportunity they gave me, that I’m going to respect the laws here, the ways of life, embrace the diversity and give back to the community,” he explained.

The Syrian-Canadian has by now more than earned the right to call himself a citizen, but he is not likely to forget the toll it took on him to get here.

“It is bittersweet because it cost me a lot to get to this moment,” he said. “It cost me 15 years separation from my family. A niece and nephew I don’t know. It cost me a father. I wasn’t there when he passed away to say goodbye. It cost me my country, a destroyed country. It cost me jail, interrogations—hundreds of them. Detention. Sleeping on the floor of the airport. Being subject to racism and discrimination. It cost me a lot— but I still consider myself one of the luckiest.”