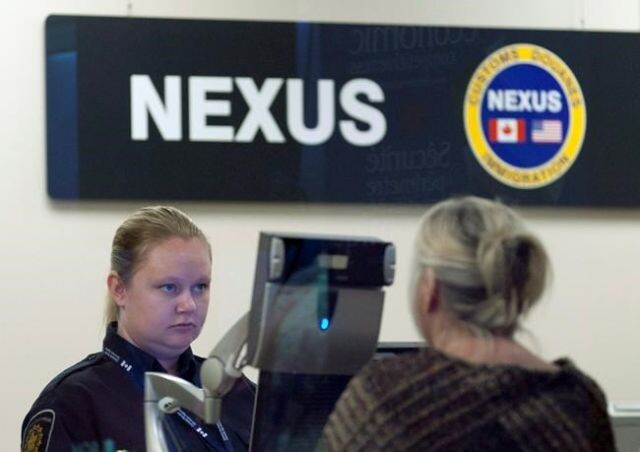 Canada and the United States are laying out the details of their new bilateral workaround for the Nexus trusted-traveller system.

The biggest change, to take effect in the spring, will allow U.S. border agents to interview Nexus applicants at select Canadian airports before boarding a U.S.-bound flight.

That will happen only after applicants take part in a separate, appointment-only interview with Canadian agents at a Nexus airport enrolment centre.

The Canada Border Services Agency and U.S. Customs and Border Protection are urging travellers to allow extra time for the U.S. interview, which will not require an appointment.

A new enrolment centre staffed by officials from both agencies is also being set up in Ogdensburg, N.Y., near the Prescott, Ont., land entry point south of Ottawa.

"The U.S. portion of the Nexus interview will be conducted by CBP officers in the preclearance area of a Canadian airport before the applicant departs for the United States," the two agencies say in a news release.

"Applicants will not need to schedule appointments for the U.S. interview but are encouraged to build in time to their travel plans to allow for this interview to take place before their departure."

Existing Nexus members who renew their cards before they expire will have their benefits extended for up to five years to allow time for the interview process, if necessary.

The news release also confirms that the two countries are exploring whether to expand the new "split interview" process now in place at the Thousand Islands and Peace Bridge land entry points in Ontario.

That process requires applicants to submit to an interview with Canadian agents before crossing the border to sit down with their U.S. counterparts.

The agencies say they have completed more than 200,000 enrolments since Oct. 1 and reduced the application backlog by 100,000 since it peaked last summer.

The U.S. also has 13 enrolment centres where applicants have the option to schedule same-day interviews with agents from both countries.

While those centres reopened in April after closing during the COVID-19 pandemic, most enrolment centres in Canada remain closed for lack of U.S. agents to staff them.

Customs and Border Protection has refused to provide agents to work on Canadian soil without a guarantee they would receive the same legal protections and authority afforded to their counterparts working at the land border or airport preclearance windows.

"CBP officers conducting trusted-traveller program enrolment in the preclearance areas of Canadian airports for travellers departing for the United States will have the same legal authorities as when performing other preclearance functions," the release says.

That, the two countries agree, constitutes "preclearance activity" as spelled out in the 2015 agreement that allows the system to operate.

"Therefore, in the future, should Canada conduct preclearance in the United States, CBSA officers performing Nexus enrolment in those preclearance areas for travellers departing for Canada would similarly be covered by the provisions of the (agreement)."