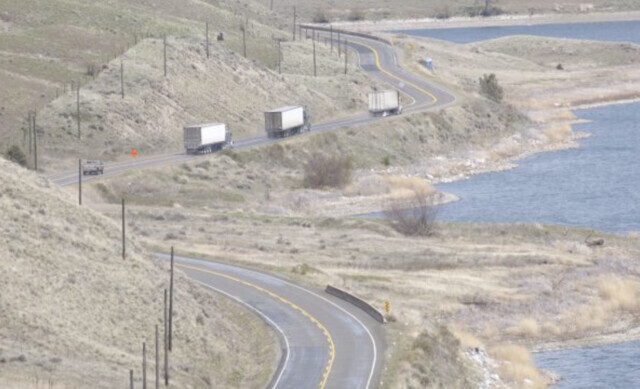 A spokesman for Stump Lake Ranch who has called for a non-local commercial vehicle ban on Highway 5A says the province’s plan to install sensors along the route doesn’t go far enough to ensure residents' safety.

Last week, the B.C. government said sensors will be installed six kilometres north of Merritt on Highway 5A to monitor real-time safety and vehicle data like weight, height and tire conditions of commercial trucks. The province said data from the sensors will be shared with CVSE officers.

According to Price, trucks travelling southbound will have already driven much of the route before hitting the sensors, and even if the devices do catch an overweight truck with bald tires, the data may not reach a CVSE officer in time.

“I’m at a loss as to what the Ministry of Transportation is hoping to achieve from this,” Price said.

He said he doesn’t believe the sensors will prevent crashes.

“Think about photo radar — photo radar was highly effective at punishing offenders, sending tickets. But it didn't stop a car driving recklessly, speeding and then causing a head-on crash a few kilometres down the highway from where they had their picture taken. It's not preventive,” Price said.

“This isn't in any way preventative. And sooner or later, we're going to end up with a catastrophic mass casualty event. And all we're going to be able to say is, ‘Oh, but we checked the tire pressure.’”

Several residents along Highway 5A have spoken out against commercial truck traffic, pointing out instances of dangerous driving behaviour that they say puts other drivers and locals at risk.

An engineering study commissioned by Stump Lake Ranch and the Upper Nicola Band found commercial trucks use more road space on the highway as shoulder space isn’t adequate — and in some places it's non-existent.

Price said some have accused him of being against trucking, which he said isn’t true.

"This is a unique situation where they have a far better option on the Coquihalla Highway, just a few kilometres to the west, running totally parallel between Kamloops and Merritt,” Price said.

“You've got the super wide highway, no populated areas. And on 5A, you've got this winding goat trail with no shoulders.”

Price said the government should think outside the box and re-designate Highway 5A as a “showcase highway.”

“You could put interpretive signage, and we could have interpretive attractions along the route showcasing the history of the highway, of its First Nation's heritage. … It was once a key trail that played a huge history in the development of the B.C. Interior,” Price said.

“Alongside of it, we got this these historic and critical grasslands, the richest grasslands in North America, we've got pristine waterways that, under current policy, are at risk every few minutes. So, I mean, think big — we can change it. It doesn't have to be Highway 5A.”