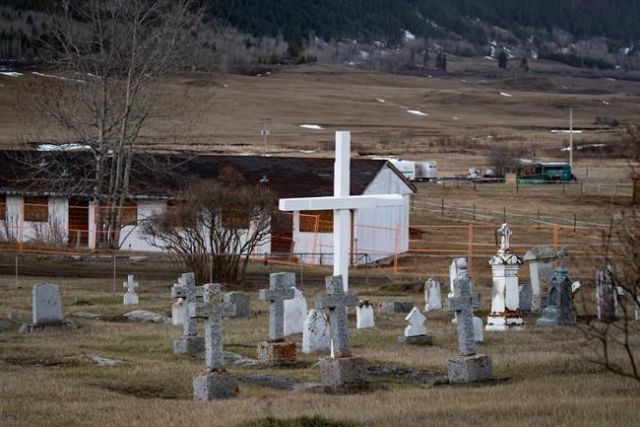 The lead investigator in the search for unmarked graves at a former residential institution near the Williams Lake First Nation in central British Columbia says the latest phase of their work has uncovered 66 additional "reflections," indicating children's graves.

Whitney Spearing told a news conference that the results of Phase 2 of their investigation show there were crimes committed against children associated with the Catholic operation of St. Joseph's Mission.

Spearing says that in addition to the reflections found in a technical survey, their interviews with survivors and archival records revealed that babies born as a result of child sexual assault at the mission were disposed of by incineration on and off-site.

Spearing says they found "a minimum" of 28 children died at the mission, which operated between 1886 and 1981, many of them buried in unmarked graves around the site.

A year ago, the nation announced the first phase of its investigation had uncovered 93 other "reflections."

Williams Lake First Nation Chief Willie Sellers says the next steps will be to potentially exhume bodies in the areas that have already been scanned, showing a total of 159 possible unmarked graves.

He says children from 48 different nations attended the school, and engaging with those nations in the process of potentially exhuming bodies is a “scary thought.”

The Indian Residential Schools Resolution Health Support Program has a hotline to help residential school survivors and their relatives suffering with trauma invoked by the recall of past abuse. The number is 1-866-925-4419.

A First Nation in central British Columbia is ready to announce results from the second phase of an investigation of grounds around the former St. Joseph's Mission residential school, outside Williams Lake.

A preliminary search in 2021 found what the Williams Lake First Nation said were 93 "reflections," indicating unmarked graves of children around the now-closed school, roughly 500 kilometres north of Vancouver.

The First Nation says a meeting will be held with the chiefs of communities directly affected by the latest search, giving them a chance to ask questions of the technical experts involved in the second phase of the investigation.

A public announcement will follow this afternoon in Williams Lake and a social media post from the First Nation says a Sacred Fire will burn until Saturday night and will include health and wellness supports for those affected.

Chief Willie Sellars says the second phase of the investigation at St. Joseph's Mission has given his First Nation "greater clarity" about what must happen next.

The probe began after ground-penetrating radar located what are believed to be more than 200 graves at the former residential school in Kamloops, prompting similar searches at former schools in B.C., Alberta, Saskatchewan, and Manitoba.

In the statement posted on the Williams Lake First Nation website, Sellars says all the communities involved must support each other and "move forward in a positive direction."

The National Centre for Truth and Reconciliation lists 4,130 names on its memorial register of children who never returned home from forced attendance at residential schools across Canada.