Man given conditional sentence after setting girlfriend's bedroom on fire 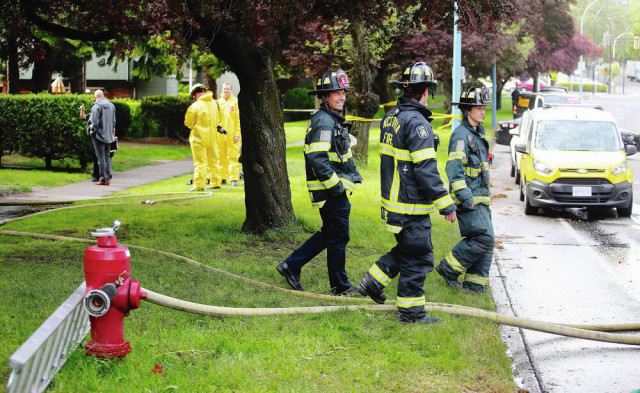 A Victoria man who set fire to his girlfriend’s bedroom, knowing other people were at home, will be allowed to serve his jail sentence in the community.

On Tuesday, Murray Sam received a 20-month jail sentence for deliberately lighting the bedroom curtains on fire in a townhouse at the Evergreen Terrace housing complex in May 2019.

B.C. Supreme Court Justice Geoff Gaul accepted a joint submission from Crown and defence after considering a Gladue report, which is prepared for the sentencing of Indigenous offenders.

Gaul said he accepted Sam has been afflicted by the intergenerational trauma caused by the historical treatment of Indigenous people.

“It has materially contributed to him being before the court on the present charge.”

Sam, 42, must abide by a curfew and take counselling. He has been ordered to pay $23,685 in restitution to his former girlfriend, Kristy Charlie, who lost all her belongings in the blaze.

The fire caused more than $1.2 million damage to the townhouse and two other adjacent townhouses.

Sam and Charlie had a tumultuous relationship, said Gaul. Around May 6, 2019, she had allowed him to move back into her home. On May 16, they went to a nightclub, returning home in the early hours after drinking a significant amount of alcohol. There were nine people in the home at the time.

Sam and Charlie had argued during the evening. Still arguing, they retired to her bedroom.

Charlie quickly left the bedroom and went downstairs to call 911. Victoria police arrived around 4 a.m. and went up to the second floor.

Sam was lying on the bed.

An officer rushed to his car and retrieved a fire extinguisher. When he returned, the flames had spread, but he got Sam safely out of the room.

There was a sense of panic and chaos with people trying to get out, said Gaul. Despite the flames, one person with an outstanding warrant hid in a closet instead of fleeing the townhouse.

The Gladue report revealed that Sam is a status member of the Tsawout First Nation on southern Vancouver Island and has spent most of his life living on the reserve. He does not know his biological father. His mother had him when she was very young and gave him up for adoption when he was three. He was taken into care of his aunt. He moved out and started living on his own at 13 or 14.

“His childhood and youth was a chaotic one, marked by neglect, physical violence and substance use,” said Gaul.

Sam was bullied and left school after Grade 11. He has significant experience working in the restaurant and hospitality industry. His income covers his current living expenses.

Members of his family attended residential schools and Indian Day schools. He and his family suffered the loss of their culture, language and social relations. This has contributed to intimate partner violence, child abuse and neglect, sexual abuse, chronic poverty and substance abuse, the report said.

It said Sam began drinking at age seven. By the time he was 12, he was drinking heavily. He began using marijuana, cocaine, crack cocaine, and MDMA. He stopped using drugs in 2014, but continues to struggle with alcohol.

His physical health is declining. He suffers from degenerative spinal arthritis and is in chronic pain 24 hours a day.

Sam began seeing a psychiatrist and a psychologist in 2021 after two people close to him took their own lives.

“Clearly, he has been traumatized by his life,” said Gaul.

Victim impact statements presented to the court by Charlie and her daughter Kaela James described how they have been affected emotionally, physically and financially by the fire. Sam’s behaviour is detrimental to all aspects of her life, said Charlie. Her daughter struggles with mental and emotional stress, and is considering trauma counselling.

Gaul acknowledged the impact on other family members and friends who had to flee on the night of the fire.

“The consequences could have been horrific,” said Gaul expressing his hope that they have help to deal with the trauma and get on with their lives in a healthy manner.

The judge also noted that Sam has taken responsibility and expressed remorse and that he was assaulted after Charlie left the bedroom and before the fire was discovered.

“His behaviour, being in a zombie-like state when police arrived and discovered him in a burning room lying down instead of fleeing, suggests he was in a desperate emotional state and wished to harm himself,” said Gaul.

“In my view, he chose to light the curtains in Miss Charlie’s bedroom on fire. He was in a heightened and despondent emotional state, fuelled by alcohol and the aggression individuals in the household had directed towards him after he had been physically violent with Ms. Charlie.

“While none of this excuses his abhorrent decision to start the fire, it does place it in the proper context,” said Gaul.