Kelowna Rockets were unable to escape an early hole, losing 3-2 to visiting Victoria 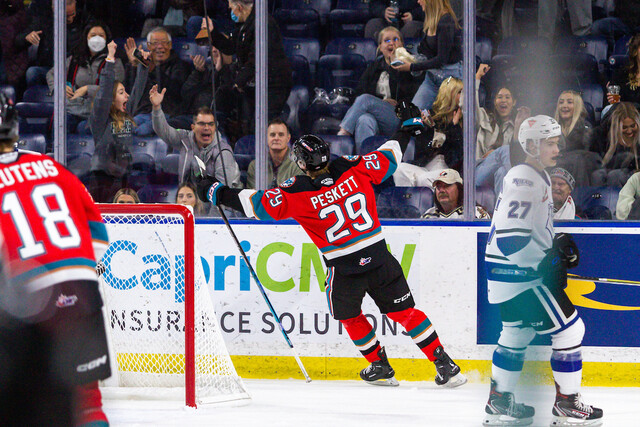 Another slow start was the undoing of the Kelowna Rockets Friday night.

The Rockets were unable to climb out of a 3-0 first period hole, falling 3-2 to the visiting Victoria Royals in their final home game before the Christmas break.

Alex Thacker and Tanner Scott staked the Royals to a 2-0 lead before the game was five minutes old. Former Rocket Jake Poole, the game's number one star, made it 3-0 with what stood up as the game winner on a power play at 14:37 of the first.

Poole was allowed to walk out of the corner to the front of the net before beating Talyn Boyko on the far side.

Head coach Kris Mallette was at a loss to explain the slow start, especially after coming off such an emotional win Sunday in Everett.

"Credit to Victoria, they put us on our heels right off the bat," said Mallette.

"Our guys were flat as flat can be and, ultimately, it cost us. We got outworked start to finish."

The Rockets pushed to get back into it in the third period, but fell short.

It was the Rockets eighth one goal loss, seven coming at Prospera Place where they lost just six times all last season.

"This group has to figure it out.

"We have a game plan. The video allows us to break down Victoria, allows our players to know exactly what they are going to do, but we just got outworked."

Mallette inserted Jari Kykkanen into the net to start the second. He did his job holding the Royals off the scoresheet the rest of the way, but the offence fell just short.

Logan Peskett, with his first Western Hockey League goal got the Rockets on the board at 14:55 of the second on a beautiful individual effort.

He took a pass from fellow rookie Ismail Abougouche on the left wing, gained the offensive zone before cutting to the slot and beating former Rocket netminder Nicholas Cristiano to the blocker side.

The goal signaled the launching of more than a thousand stuffed animals onto the ice in the Rockets annual teddy bear toss game.

Five trucks were required to take transport the teddy bears to KGH where they will be distributed to children and seniors in the coming days.

"I just got the puck and wheeled up ice and it just kind of happened," said Peskett who was thrilled to finally get his first WHL goal and become the latest teddy bear toss hero.

"I kind of cut across the middle and looked up and saw the goalie was moving across. I thought if I put it low blocker I would have a spot."

Max Graham, who has been playing his best hockey of the season over the past dozen or so games pulled the Rockets to within one eight minutes into the third, deking Cristiano to the backhand on a breakaway.

The Rockets did have their chances throughout the game.

Carson Golden hit the post early in the first after undressing a pair of defenceman on his way to the net. Dylan Wightman just missed on a backhand from in close while Andrew Cristall was stopped on a breakaway later in the first.

Colton Dach was missing from the lineup, and will be for the foreseeable future after leaving for Canada's world junior selection camp.

His absence meant the Rockets dressed just 19 skaters including 11 forwards.

That number may be reduced further when Gabriel Szturc leaves for the Czech Republic world junior camp. He is not expected to make the pre-Christmas Central Division road trip.

That means the likes of Peskett, Will Munro, Ethan Neutens and Grady Lenton who have played measured minutes will be called upon to play bigger roles.

The Rockets are back on the road Saturday in Langley to face the Vancouver Giants.

They conclude the pre-Christmas portion of their schedule in Swift Current, Lethbridge and Medicine Hat next week.