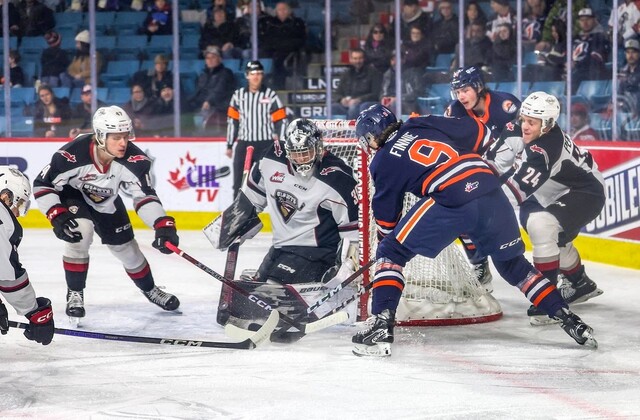 Matthew Seminoff scored the game-winner with eight minutes remaining in the third period on Friday at Sandman Centre as the Kamloops Blazers held off the Vancouver Giants to earn a 2-1 win.

Shea Van Olm and Seminoff were the goal scorers for the Blazers. Ty Halaburda scored the lone marker for Vancouver.

After a scoreless first, Halaburda opened the scoring at 3:29 of the second period. Van Olm tied the game 70 seconds later and Seminoff tallied the winner at 11:54 of the third.

Dylan Ernst was solid in net for the Blazers, stopping 22 of 23 Vancouver shots to earn his 14th win of the season. Giants netminder Jesper Vikman stopped 29 of 31 Kamloops shots in the loss.

Ashton Tait, who was called up by the Blazers earlier this week, notched his first WHL point — an assist on Van Olm's second-period goal.

Announced attendance at Sandman Centre was 4,144.

The loss moves the Giants to 10-13-3-2 on the season. They are three points behind the Cougars in the division standings.

The Blazers will be back in action on home ice on Saturday, when the Victoria Royals (5-21-3-0) visit Sandman Centre for the annual Teddy Bear Toss game. Puck drop is 7 p.m.