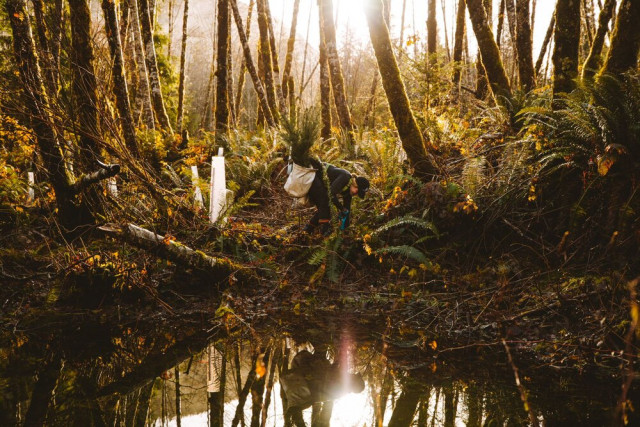 Photo: Graeme Owsianski.
A staff member from Redd Fish Restoration Society plants trees funded under the federal Two Billion Tree program in a watershed on Vancouver Island. In 2021, the group and local First Nations planted over 50,000 trees across two watersheds.

Canada has renewed its call to plant two billion trees across the country by 2031, launching its third round of proposals Friday on where and how to sink seedlings into the ground.

The program is now open to project proposals “at any time,” something the Ministry of Natural Resources says will create the flexibility required to plant the right trees “in the right place at the right time.”

"Trees are a critical part of our plan to combat climate change and curb biodiversity loss,” said Minister of Environment and Climate Change Steven Guilbeault in a written statement.

Guilbeault added that the tree planting program would help achieve a number of priorities across the country, including protecting ecosystems, creating green jobs and protecting cities from extreme weather events.

The tree planting program is designed to boost the natural environment’s ability to absorb atmospheric carbon, thereby fighting the climate crisis, while trying to slow biodiversity loss across the country.

Trees and other green spaces also provide a powerful local buffer against extreme temperatures, while filtering water and helping to reduce peak flood levels. At the federal level, the government of Canada has flagged reforestation as a critical component of its national adaptation strategy to climate change.

A year after a 2021 heat wave killed 619 people in British Columbia, a BC Coroners Service report into the deadly event flagged tree canopy decline and the rise of solo urban living as major current and future risks.

Some of the long-term solutions the service recommended included densifying and greening neighbourhoods at the same time, while changing building codes to ensure retrofits and new builds are designed with extreme heat in mind.

The two billion tree program was largely on track through 2021, its first year, with 97 per cent of the 30 million trees slated for planting making it into the ground.

In 2022 and 2023, the federal government plans to double that to 60 million trees planted annually. By 2027, the number of trees planted across Canada under the program is expected to peak at 320 million per year.

That will require ramping up contracts with tree nurseries several years in advance to ensure a steady supply of saplings.

Ottawa has said it would invest $3.2 billion over the course of the decade-long program. The money will go to planting trees on public and private land, from the biggest cities to the most remote areas of the country.

Some of those trees will be planted in places that have completely lost their forests; in other locations, reforestation will mean regenerating forests degraded by wildfire, logging, mining or by seismic lines blazed during the exploration of oil and gas.

The money will not back planting programs where companies have a legal obligation to regenerate forests they have destroyed, nor will it support replanting on private land “as part of business-as-usual commercial forestry activities,” according to the Ministry of Natural Resources.

Also off-limits: lands where unique habitats support a variety of native species endemic to the country.

To date, more than 500 sites have been planted and restored under the two billion tree scheme, according to the ministry.