No decision on landfill search, Winnipeg Police Board considering outside help

No decision on search 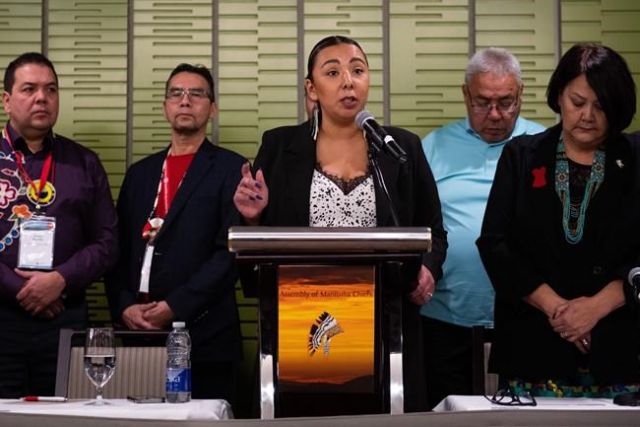 Photo: The Canadian Press
Chief Kyra Wilson of the Long Plain First Nation speaks during a press conference at the Assembly of First Nations Special Chiefs Assembly in Ottawa, on Thursday, Dec. 8, 2022. Indigenous leaders and family members have called for the resignation of the Winnipeg police chief in light of the force's decision not to search a landfill for the remains of two homicide victims. THE CANADIAN PRESS/Spencer Colby

Decisions on next steps in a potential search for the remains of two Indigenous women believed to be at a landfill outside Winnipeg are being worked through with the option of bringing in outside help, the city's police board said Friday.

Investigators believe the remains of Morgan Harris and Marcedes Myran ended up in the Prairie Green landfill in the spring. But police decided not to conduct a search as the chances of finding them are low due to the amount of time that has passed and the fact that 10,000 truckloads of refuse were dumped in the area in the following months.

The Winnipeg Police Board met with police Chief Danny Smyth and investigators on Thursday night, after calls to search the site intensified.

Conversations focused on consulting waste management experts and forensic anthropologists to determine what outside resources are needed to go ahead with a search,said city Coun. Markus Chambers, who is also the chairman of the police board.

"(It was about) getting a position on how it can be done in order to provide something for these families that demonstrates that they matter," Chambers said.

"We don't want to be disingenuous in this. It is about trying to find some closure for these families."

Chambers is confident a search can take place but stopped short of committing to a timeline. He acknowledged the logistical and safety concerns outlined by police.

Trash at the landfill is compacted with mud at a depth of about 12 metres that would require heavy equipment to dig through, Chambers said.

Anything collected would have to be inspected off site and there is also the possibility that any remains found may belong to an animal or a different person, he added.

The councillor said he has had businesses with experience in excavation digs reach out to him to offer their support.

Indigenous family members of missing or murdered women have expressed concerns that their loved ones may be in landfills.

"I don't want to speculate. I don't want to say for certain, but there's a potential that there could be other bodies there," Chamber said. "So, DNA testing is going to be a component of it."

Operations at the landfill have been halted as the city and the province discuss next steps.

Premier Heather Stefanson said she reached out to management Thursday to discuss stopping trash disposal. The operator told her it had already stopped in the area.

"They were indicative that they were supportive of this," Stefanson said Friday at a special premiers meeting.

"We are working very co-operatively with the owner and the operator of the landfill site."

Jeremy Skibicki is charged with first-degree murder in the deaths of Harris, Myran, Rebecca Contois and a fourth unidentified woman that Indigenous leaders have called Buffalo Woman.

Police said they believe the four women were killed in the spring, although investigators have so far only located the remains of Contois. They were found in a garbage bin in the city and in a separate landfill.

Family of Harris and Indigenous leaders have called for the police chief's resignation in light of the force's decision not to search the landfill.

The Southern Chiefs' Organization, which represents 34 First Nations in southern Manitoba, said the landfill should be declared a crime scene immediately.

"The Winnipeg police should be using all their resources to find these women," Grand Chief Jerry Daniels said in a statement.

Chambers said he understands families are frustrated, but the police board will focus on moving forward.

"It's about working together and not pointing fingers. It's not easy work and emotions do get high around homicides. I understand it," he said.

"But let's focus on getting justice for the families."

Chambers also said the public should be reminded that police are still trying to determine the identity of Buffalo Woman.