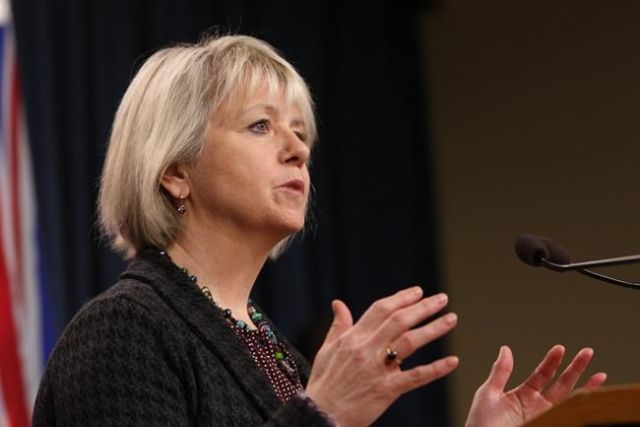 Photo: The Canadian Press
Provincial health officer Dr. Bonnie Henry talks in the press theatre at the legislature in Victoria, B.C., on Thursday, March 10, 2022. The B.C. Centre for Disease Control says a deadly spike in acute respiratory illness is showing signs of stabilizing, after the flu-related deaths of at least six children and youth this season. Friday's update came a day after provincial health officer Henry said pediatric flu deaths would be included in its weekly updates. THE CANADIAN PRESS/Chad Hipolito

The British Columbia Centre for Disease Control says a deadly spike in acute respiratory illness is showing signs of stabilizing, after the flu-related deaths of at least six children and youth this season.

The centre says in a new update that influenza A was the most detected virus in B.C. last week, while wastewater tests indicate a slow increase in COVID-19 infections.

It says B.C. is experiencing an unusual season for respiratory illnesses with "unusual characteristics," including an intense early surge in cases and the flu-related deaths of children and youth.

The centre says enhanced surveillance has been introduced as a result, which includes the reporting of influenza-related deaths of children and youth.

It says although test positivity remains high for both influenza and respiratory syncytial virus, or RSV, the numbers have levelled off in the past week.

The six young people who died with influenza include one child under five, three aged five to nine, and two youths aged 15 to 19 years.

"Early findings indicate some of the children experienced secondary bacterial infections contributing to severe illness, which can be a complication of influenza," Henry said in a statement.

"It is important to know that death associated with influenza in previously healthy children continues to be rare."

The CDC also reports 17 deaths last week among patients within 30 days of a first positive COVID-19 test, a figure that it says has been declining.

It says there were 539 COVID-19 cases reported and 140 new hospital admissions, including 33 in critical care.

The recent flu deaths among children mark a departure from the average two to three recorded annually among children in the province between 2015 and 2019, data from the BC Coroners Service shows.