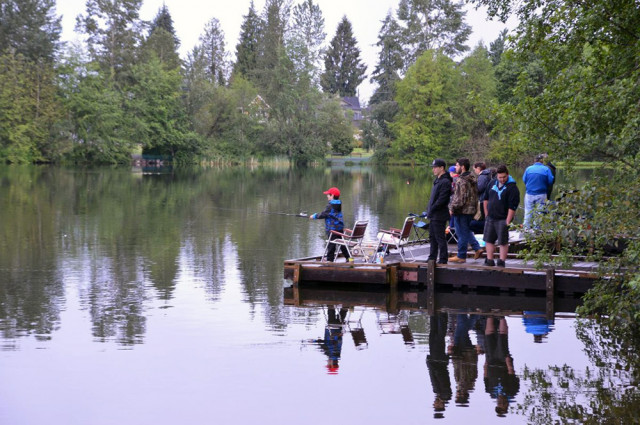 Photo: .
Como Lake is the site of Coquitlam's annual fishing derby and the headwaters of Como Creek.

An Alberta-based energy and infrastructure contractor must pay $2.8-million for discharging drilling fluid and sediment-laden water into Coquitlam and Surrey creeks.

In what may be the largest known penalty for polluting a Coquitlam creek, Michels Canada Co. was ordered to the fine during a hearing in Surrey provincial court on Tuesday (Dec. 6) in which the company pleaded guilty to two charges under the Fisheries Act.

"The next step is to see it collected and resourced in the way that will help the creek system," said ZoAnn Morten, executive director of the Pacific Streamkeepers Federation.

Numerous creeks throughout Coquitlam have suffered fish kills in recent years due to pollutants being discharged into storm drains.

Morten said the fine sends an important message to companies that work around local creeks, and comes after the City of Coquitlam established a policy requiring developers to monitor discharge from construction sites in the Stoney Creek watershed.

In the order, announced this week by Environment and Climate Change Canada, Michels Canada will now be added to the Environmental Offenders Registry, which records convictions of corporations registered for offences committed under certain federal environmental laws.

Michels Canada was charged following two spills in the summer of 2017, when the company was working in Como Creek in Coquitlam and Quibble Creek in Surrey.

On Aug. 22, 2017, Michels Canada was the head contractor responsible for horizontal directional boring operations in Coquitlam, when drilling fluid and sediment-laden waters were released through the storm sewer system into Cape Horn Creek.

Twenty dead fish were found following the release, according to Environment and Climate Change Canada, which posted information about the fine yesterday (Dec. 8).

A few weeks later, on Sept. 2, 2017, the company was carrying out horizontal directional boring operations in Surrey, when there was a release through the storm sewer system of drilling fluid and sediment-laden waters into Quibble Creek. Following the release, 533 dead fish were found in this creek.

Officers went onsite where they collected water samples, dead fish, and other evidence relating to the spills.

Through testing, the deposits of drilling fluid and sediment-laden waters into Cape Horn Creek and Quibble Creek were determined to be deleterious, or harmful, to fish, which is a violation of subsection 36(3) of the Fisheries Act.

The fines will be directed to the Government of Canada's Environmental Damages Fund and the money will be used to support projects that have a positive impact on the environment, according to the ministry.

Other recent spills of note in the Tri-Cities have underscored the importance of preventing pollutants from flowing into creeks, rivers and storm drains.

In February, CP Rail was found to have spilled diesel fuel, which flowed into a Port Coquitlam storm drain.

And, in November 2021, Trans Mountain contractors spilled a clay-additive called bentonite into a watercourse during horizontal-directional drilling.

Recently, a homeowner was fined $500 for dumping paint down a storm drain in Coquitlam.

Morten told the Tri-City News the fine is large enough to cause companies to be more careful because it's more than what could be considered "the cost of doing business."

However, she said she would like to see companies be required to also produce a plan to show how they will prevent similar discharges from happening in the future.

"It would be interesting to see how it plays out, and if what follows the fine, the courts were to say 'give us a plan to ensure this doesn’t happen again.'"

Where is Cape Horn Creek in Coquitlam?

Cape Horn Creek flows into the Coquitlam River and downstream to the Fraser River.

Quibble Creek, meanwhile, flows into the Serpentine River and downstream to the marine waters of Georgia Strait and the Pacific Ocean.

These creeks are inhabited by salmonids year round, according to Environment and Climate Change Canada, including juvenile salmonids.

Among the species of note are rainbow trout, cutthroat trout, and coho salmon.

Coastal cutthroat trout are a species of concern and designated "at risk."