Flu deaths to be posted 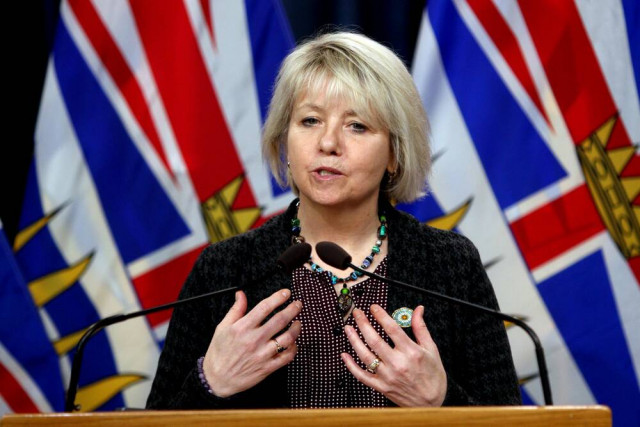 Photo: .
B.C. provincial health officer Dr. Bonnie Henry has warned the province is seeing a "dramatic increase" in cases of Influenza A, particularly H3N2, which can cause severe illness, especially in children. THE CANADIAN PRESS/Chad Hipolito

B.C.’s provincial health officer says the number of pediatric flu-related deaths will be posted weekly, after six child and youth deaths so far this season.

One of those deaths involved a child younger than five, while three were between five and nine, and two were between 15 and 19, Dr. Bonnie Henry said.

On Monday, Henry and Health Minister Adrian Dix warned the province is seeing a “dramatic increase” in cases of Influenza A, particularly H3N2, which can cause severe illness, especially in children. Citing a spike in flu-related hospital ER visits for young children, they urged that children and youth be vaccinated.

An average of two to three influenza-associated deaths of children and youth a year typically occurred in B.C. between 2015 and 2019, according to data from the B.C. Centre for Disease and Control.

Early findings indicate some of the children who died experienced secondary bacterial infections, which can be a complication of influenza.

The fact influenza can lead to secondary bacterial infections such as streptococcus or pneumococcus that can cause serious bacterial pneumonia makes it more concerning in young children than COVID, health officials say.

Henry said Thursday that while children have the highest respiratory-virus infection rates, most recover safely at home without need for medical intervention. Death associated with influenza in previously healthy children “continues to be rare,” she said.

“This is an unusual season with unusual characteristics, including an early and intense surge in cases,” said Henry, adding enhanced surveillance of pediatric influenza-related deaths is in place.

As information is confirmed, updates on pediatric influenza-related deaths will be posted weekly as part of the respiratory surveillance summaries on the BCCDC website, she said.

Vaccination is the best defence to prevent or reduce risk of severe complications, said Henry, adding it’s particularly important for children at highest individual risk of severe outcomes, including those with chronic medical conditions, those who need to take Aspirin or ASA for long periods of time, children who are very obese, infants and toddlers.

For children at high risk of severe complications, parents should consider talking to their care providers about getting early access to an anti-viral drug called oseltamivir (Tamiflu), which is most effective against influenza if started within 12 hours, and ideally not later than 48 hours after illness onset, said Henry.

Henry advised parents to seek medical care if a child experiences difficulty breathing, or has a fever that goes away and comes back or persists longer than five days, which may indicate a bacterial infection.

With multiple respiratory illnesses circulating, Henry urged people to take all preventative measures, including staying home if sick, frequent hand-washing, and wearing a mask when needed.