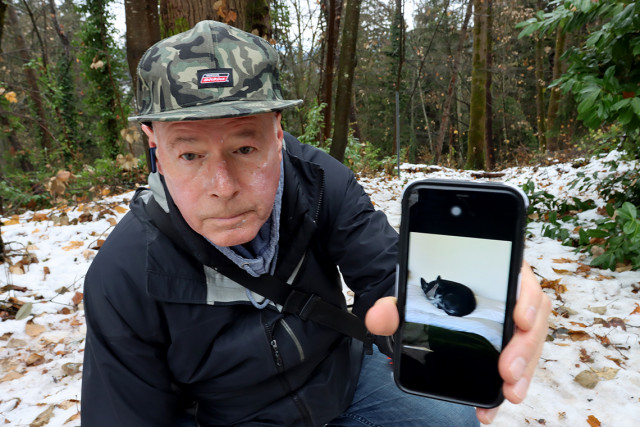 The BC Conservation Officer Service is advising residents of Port Moody’s Glenayre and College Park neighbourhoods to be extra vigilant after a spike in calls about emboldened and aggressive coyotes.

Conservation officer Evelyn Robertson said officers were dispatched to the area after it had received several reports of “concerning behaviour” by coyotes, including close approaches to kids, inflicting injuries to off-leash dogs and outdoor cats and even snatching one dog away from its owner.

John Bail was that owner.

He was walking his 14-year-old mix-toy dog, Cinder, along with two larger dogs that belong to neighbours, when they encountered a big reddish-coloured coyote near his home at Chateau Place at the corner of Angela Drive and Evergreen.

Bail said only one of the neighbours’ dogs was on a leash.

Cinder and the third dog, a large Australian Shepherd named Beau, ran toward the coyote, which stood its ground.

Bail said Beau backed off when he called, but Cinder kept going and before he knew it, the little black 11-pound pup wearing a pink jacket to keep warm was clamped in the coyote’s jaw. It turned and loped down a trail into a nearby ravine.

Bail said he was stunned.

He tried to track the coyote, but the lingering snow and ice made the steep trail slippery and precarious.

Bail said though he’d seen chatter on local social media channels about coyotes in the area, he thought their usual skittish behaviour around humans would defuse any encounters.

“Usually it would run,” he said. “This one just stood and looked.”

They were able to track one animal and euthanize it, but efforts continue to identify the extent of the coyote population in the neighbourhood.

Ken Hoff, spokesperson for School District 43, said while he couldn’t confirm any incidents at the schools, the district does have procedures for wildlife encounters.

Those include increased staff monitoring of outside areas during lunch and recesses as well as alerts to bring the children indoors right away and shelter in place if a threat has been identified.

“Wildlife encounters are somewhat common at many of our school sites,” Hoff said.

Robertson said the coyotes are likely attracted to the area because of an easy and abundant food supply that such as unsecured garbage containers, outdoor cats and unleashed dogs.

“We all play a part in reducing conflicts,” she said.

Bail said he knew that when he headed out for his walk on Monday, but he let his guard down.

“I thought I was in a safe place.”

He said the loss of Cinder hits especially hard because the dog actually belonged to his daughter but he took over its care after she passed away unexpectedly in October.

“I wanted to treat her like a princess and do everything I can for this dog,” he said. “It hurts a lot to think about it.”

If you spot a coyote, or any other wildlife, exhibiting concerning behaviour, contact the RAPP line (Report all Poachers and Polluters) at 1-877-952-7277.