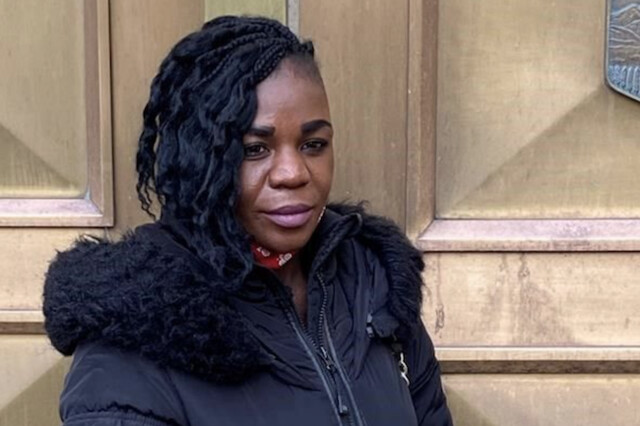 A Calgary police officer who slammed a handcuffed woman to the ground face first will not be allowed another appeal of his original conviction.

Const. Alex Dunn, 36, was found guilty in December 2020 of assault causing bodily harm, and was given a 30-day conditional sentence that involved a combination of 24-hour house arrest followed by house arrest with a curfew.

Dunn had brought in Dalia Kafi in December 2017 for breaking a curfew. A security camera in the arrest area at Calgary police headquarters captured what happened.

The video played during his trial showed him throwing Kafi down and blood pooling on the ground where her face hit the floor.

Kafi died in June 2021 of a suspected overdose, days before Dunn was sentenced.

Dunn, who has been suspended without pay, appealed his conviction last year, but Justice Robert Hall upheld the lower court ruling and rejected calls by the officer’s lawyer for a new trial. He found that even if provincial court Judge Michelle Christopher had believed the offender’s testimony, a conviction was inevitable.

He argued the original judge was too quick in dismissing the credibility of Dunn's testimony, in which he said he thought Kafi had slipped out of her handcuffs and posed a threat.

"It is a case where the trial judge, in a way, sort of boxed herself in by making these credibility findings to the point where she deals with the credibility of all the Crown witnesses and, in short, seems to lay or put on Mr. Dunn a heavy onus — almost reversing the onus of proof," Hepner said.

"I submit that Mr. Justice Hall just followed the line of the narrative by the trial judge without addressing any leave issues."

"The applicant has failed to satisfy me that the test for permission to appeal … is met and, accordingly, I must dismiss the application," she ruled.

"The trial judge's assessment of the evidence and credibility findings are entitled to deference and there's no suggestion that the summary conviction appeal judge applied the wrong standard of review here."

The Court of Appeal is expected to hear further arguments on the case next year as the Crown has appealed the 30-day conditional sentence given to Dunn.