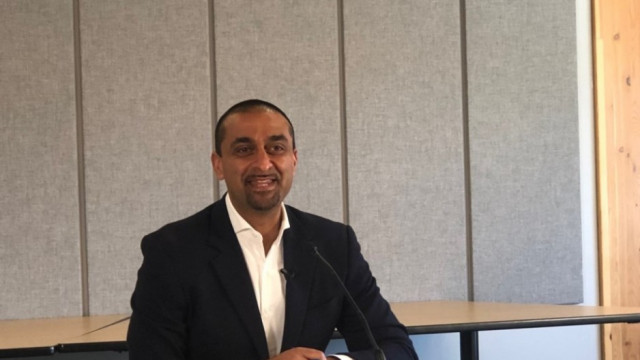 Photo: File Photo: Hanna Petersen, Prince George Citizen.
Minister of Housing Ravi Kahlon said he will be meeting with Vancouver's Mayor Ken Sim to discuss "speed and supply" in addition to the challenges faced by the Downtown Eastside

As B.C.’s new Ministry of Housing embarks on tackling the priority of creating “attainable and affordable housing,” the province's new housing minister, Ravi Kahlon, told BIV Thursday that he will be focusing on “speed, supply and synergy.”

“It starts at the top. Premier Eby has already set a very aggressive pace at taking action for important issues that British Columbians care about, and my goal is to keep pace with them,” Kahlon said.

“It's an exciting opportunity and this is the right time for us to be taking these things on.”

One day after being appointed into one of the most anticipated cabinet positions in B.C.’s provincial government, Minister Kahlon is having to answer for issues such as soaring home prices and constant roadblocks to creating more supply. He described his first morning as Minister of Housing as a “whirlwind.”

The new minister will be meeting with Vancouver’s Mayor Ken Sim to discuss “speed and supply,” in addition to the challenges faced by the Downtown Eastside. Public safety in Vancouver’s communities will also be discussed as Kahlon looks to tackle these issues in a cooperative way, he said.

Other mayors that he will be meeting with in the near future are: Delta Mayor George Harvie who also acts as the chair of Metro Vancouver's board of directors, Burnaby’s Mike Hurley and Mayor Brad West in Port Coquitlam.

In order to take the mandate “speed, supply and synergy” and turn it into concrete action, Kahlon said he will be working to expedite approval processes on both a municipal and provincial level, continue the effort of the Housing Supply Act and build relationships with local governments to build non-market and market type housing.

Among the challenges Kahlon will have to overcome are the pressures faced by the construction industry as a result of interest rate hikes and issues with cost and labour.

“The labor shortage is a real challenge. We know that skilled trades are one of the areas that we're seeing the biggest pressures on our labour market. And it's only second to the care economy,” he said.

In order to mitigate these issues, he plans to work closely with Minister Robinson at the Ministry of Post-Secondary Education and Future Skills to ensure that there are adequate training opportunities and pathways for new immigrants to enter into the construction industry.

BC Housing, the agency that delivers government-funded social housing, has seen significant changes with a new board, the search for a new CEO as well as undergoing a forensic audit as a result of an independent report that found issues within the Crown corporation.

In addition, Kahlon said he will be working alongside Teri Collins who will act as the Ministry of Housing’s deputy minister. According to Kahlon, Collins “has been on the housing file for the last year” and has a good understanding of Premier Eby’s priorities. Collins and Kahlon will be meeting tomorrow in order to refresh the province's housing strategy, he said.

“Everything coming out of the pandemic needs to be relooked at. There's a lot of things that have changed. One of the priorities for me will be to refresh that housing strategy to make sure that it reflects the time that we're in now and the challenges that we have in front of us,” Kahlon said.

Kahlon will also be joined by Parliamentary Secretary for Rural Development Roly Russell.

“I'm so excited that he'll be joining us in our ministry to do this important work, because the challenges we face in larger urban centers are different from what we face in rural communities. And Roly brings that lens, and there's a lot of communities, in fact, all communities now want to talk about housing. Having somebody as capable as Roly on the team will help us be more effective,” he said.