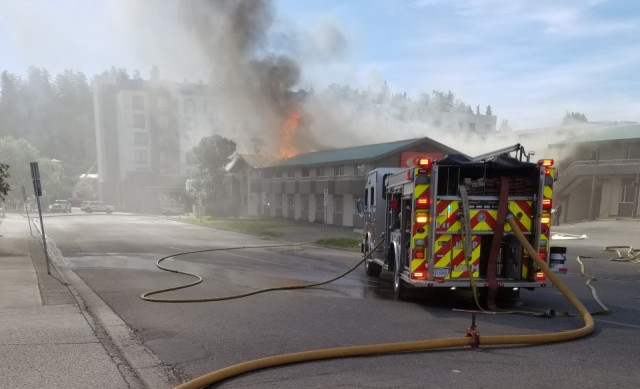 A lawsuit filed in the aftermath of a deadly fire at a downtown Prince George motel has been certified as a class action.

In a decision issued this week, B.C. Supreme Court Justice Marguerite Church found that the lawsuit filed by Leonard Hay in the month that followed the July 8, 2020 blaze at the Econo Lodge Motel met the standard. Three people were killed in the fire.

"I find that the plaintiff has established that the pleadings disclose a cause of action, there is an objectively identifiable class, the claims of the class members raise common issues, a class proceeding is the preferable procedure, and that he is a suitable representative plaintiff," Church wrote.

Hay, one of the motels occupants at the time of the fire, seeking damages on behalf of those injured or who lost property in the blaze.

Hay maintains he did not hear any fire alarms or see motel staff assisting in the evacuation and that he suffered second-degree and third-degree burns as well as psychological injuries and all his possessions were destroyed.

The development is a step in a longer process in which the plaintiffs must still prove various allegations on balance of probabilities and, if that succeeds, argue for damages.

Mundi and Choice Hotels are the motel's registered owner and franchisor, the city regulates building construction and maintenance, and is responsible for fire inspections and enforcing compliance with the BC Fire Code and the BC Building Code and All Points reviewed, tested, repaired and inspected the motel's fire safety systems prior to the fire.

In her decision, Church said an investigator determined the fire was largely contained to one side of the motel and affected a limited number of rooms, that the fire originated in the vicinity some old flooring material placed near the southeast stairwell as part of a renovation the motel had been undergoing and that the fire had been deliberately set.

Prince George RCMP later found evidence of gasoline near the stairway, Church also noted in the decision and added that the plaintiff asserts that the arson was "only possible due to the negligence of the defendants, including inadequate security, lack of control of third parties on the premises, and unsafe conditions at the Motel."