Humpback swims from B.C. to Hawaii despite severe injury, likely her last journey 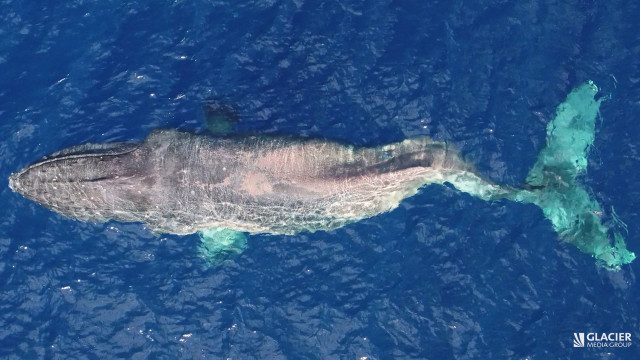 A humpback whale believed to be severely injured by a ship strike off the coast of Northern B.C. has made it the breeding grounds of Hawaii using only her pectoral fins.

The entire back of the mature female known as Moon — from dorsal fin to fluke — is curved into an unnatural “S” shape. The spinal injury has rendered Moon’s tail almost completely immobile, said Janie Wray of the North Coast Cetacean Society.

“The harrowing images of Moon’s twisted body in Maui stirred us all,” said Wray. “Not only was she likely in considerable pain, but she had somehow migrated thousands of miles across the North Pacific to her Hawaiian breeding grounds without being able to propel herself with her tail.”

Researchers said Moon’s 55-day journey from the feeding grounds of the B.C. coast to the breeding grounds near Maui has left her completely emaciated with excessive loads of whale lice, adding to her severely depreciated condition.

It’s doubtful that the female humpback will return, said Jackie Hildering, a humpback researcher with the Marine Education and Research Society based in Port Hardy.

“She will die … there’s no way she will be able to make it back because she’s so emaciated,” said Hildering. “She was breast-stroking the whole way. It’s a tragedy, but it shows the tenacity of their inherent need to migrate.”

Humpback whales gorge on krill and small fish off the North American coast and migrate to warm waters to breed before returning in the spring with calves.

Drone footage by researchers in B.C. and Hawaii between early Sept. 1 and Dec. 1 show the severely emaciated body of Moon, whose skeletal structure is showing and her flesh along the spine is pink.

Wray said Moon’s condition represents the stark reality of a vessel strike, and tells the extended suffering that whales can endure if they survive a collision.

“It also speaks to their instinct and culture — the lengths whales will go to follow patterns of behaviour.”

Wray said researchers will never truly understand the strength it took for Moon on what is likely her last journey. “But it is on us to respect such tenacity within another species and recognize that vessel strikes lead to a devastating end,” she said.

Moon was familiar with researchers on the north coast. She was often seen in the late fall on the feeding grounds off Gitga’at First Nations territory. She was seen with a calf in the area in 2020.

Hildering said the rise in humpback populations has brought more ship strikes. She said five dead humpbacks have been discovered over the past month off Vancouver Island and Haida Gwaii — and Hildering believes at least two of those have been confirmed deaths from boat hits. Federal scientists are currently determining causes of death on all of the animals.

She said there are likely countless other whales who are hit and sink to the bottom of the ocean.

“We’re not doing enough to avoid and save these whales,” said Hildering. “There’s no question that Moon got plowed.

“It’s the law to report collisions … but sometimes these ships are so large [mariners] don’t even feel any impact.”

Canadian regulations say all boaters have to stay 100 metres away from humpback whales and all vessels are required to report any contact with marine mammals.

Whales can surface unpredictably in front of vessels. Baleen whales such as humpback can remain submerged for 15 to 20 minutes and often exhibit random travel patterns.

The Marine Education and Research Society’s campaign See a Blow? Go Slow campaign warns boaters that whales may surface without warning and can be difficult to avoid, especially when vessels are travelling at speed.

Boaters should report any witnessed incidences of concern surrounding ship strikes or entanglement to the DFO Incident Reporting Line at 1-800-465-4336 or on VHF Channel 16.