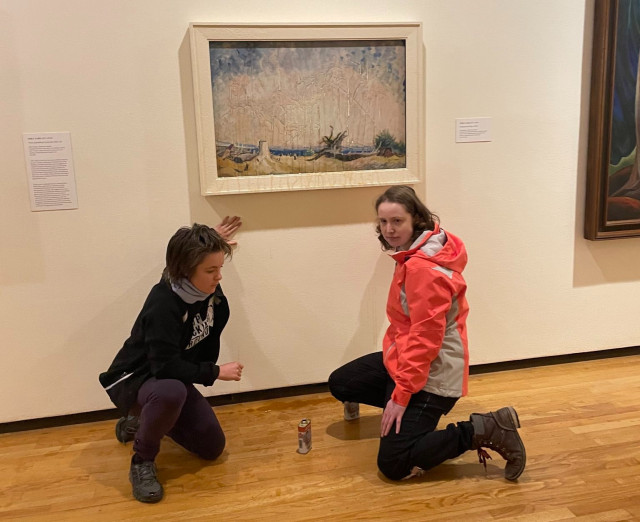 This year, art galleries around the world have been the subject of both admiration and vandalism.

A trend that started in the spring has picked up in the recent months, targeting the Vancouver Art Gallery among other prominent art galleries.

Activists with environmentalist groups including Stop Fracking Around, Just Stop Oil, Extinction Rebellion, Germany's Letzte Generation, and Italy's Ultima Generazione have taken to vandalizing and gluing themselves to famous artworks to bring attention to the climate crisis.

The first incident that gained worldwide attention occurred in May when a man dressed as an elderly woman in a wheelchair assaulted the Mona Lisa painting with cake, reports an article by Artnet outlining the timeline of vandalized artworks over the year.

Last month, climate activists with the group Stop Fracking Around doused an Emily Carr painting with maple syrup at the Vancouver Art Gallery.

An official statement from the gallery condemned the vandalism, adding that it does "support the free expression of ideas, but not at the expense of suppressing the ideas and artistic expressions of others, or otherwise inhibiting people from access to those ideas."

France’s culture minister asked the country’s museums to “redouble their vigilance," reports Artnet. With the attacks on art galleries having struck home, have Vancouver art galleries done the same?

Despite wireless motion sensor systems, full CCTV coverage, and 24-hour on-site security, "it is difficult to stop someone determined to cause mischief. It only takes a few seconds to throw food or paint at an artwork," he says.

A similar reply came from a private art gallery. "We are always vigilant when it comes to security and as such, all appropriate security measures are in place," assures Gallery Director Oree GIanacopoulos at Chali-Rosso Art Gallery.

V.I.A. has reached out to the Vancouver Art Gallery for a comment about their surveillance following the vandalism on Nov. 12 but has not heard back.

It seems that for Vancouver art galleries, the emphasis hasn't been on redoubling their vigilance but rather on maintaining their already extensive surveillance.

"As a public gallery that is very accessible and open to the public, mitigating damage and theft to the art on display is a high priority for us," says Keatley.

For private art galleries as well, "any damage to the collection would pose a devastating financial loss," says GIanacopoulos. "In the past, our gallery has also experienced substantial losses caused by vandalism and we are painfully aware of the financial consequences."

Vancouver has seen many protests and demonstrations surrounding climate activism, however, the rising "campaigns of nonviolent civil disobedience" by environmentalist groups "are also clearly aimed at an international audience," states Time Magazine.

Though the overall aim is to bring global attention to the climate crisis, the strategy is "misguided and is actually having a negative impact on people's willingness to support this group of activists," shares Keatley, specifically in reference to the protesters who poured maple syrup on a painting at the Vancouver Art Gallery.

"Regardless of how this group feels about the urgent need to shake people out of their complacency on climate change, art is a shared cultural heritage and holds meaning and significance to both the art community and the general public. I feel these actions are angering and alienating a core group of people who should be their natural allies in the climate change crisis." he says.

The damage done by these acts of vandalism goes beyond the paintings themselves, he points out.

"The activists are targeting very well-known artworks in galleries around the world, and this could lead to the closing down of open access to public collections to prevent damage," Keatley says.

He adds that there is also a possibility that insurance agencies that cover public museum and art gallery collections will raise their costs or withdraw coverage completely, which would gravely impact their ability to function as public cultural facilities.