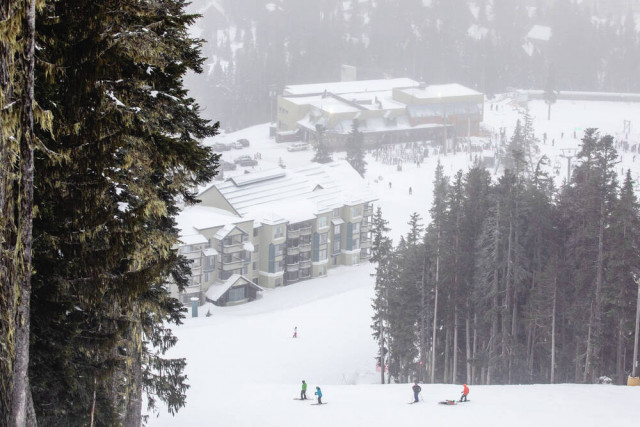 As Mount Washington Alpine Resort, on Vancouver Island, prepares to officially open on Friday, visitors are being asked to bring their own bottled water and reduce the number of toilet flushes amid a troubling water shortage.

The springs that produce Mount Washington’s potable water supply have slowed to “record low-production,” according to the resort.

With visitors to the mountain expected to increase as the holidays approach, Mount Washington said concerns about potential water shortages have prompted immediate measures to conserve the current supply.

It’s setting up portable washrooms to reduce the use of indoor plumbing, shutting off water refill stations, using disposable plates and cutlery in food-service operations to reduce the use of dishwashers, and offering bottled water for sale at food and beverage outlets and retail locations around the resort.

Mount Washington said the Island is experiencing the worst drought levels in more than 15 years. It noted the Puntledge River flow and the Comox Lake Reservoir level are at historic lows and, according to B.C. Hydro, the Campbell River reservoir storage is the lowest on record since 1984.

“Snow pack in the upper watershed is less than 25% of what is considered normal for this time of year,” the resort said in a statement. “With Mount Washington’s elevation at the top of the watershed, we are among the first to be affected by water shortages.”

The resort said it is preparing to stockpile backup water supplies for emergency use and is testing alternative potable water sources. It is also preparing for potential boil-water advisories.

In the meantime, the resort is asking visitors and residents to take shorter showers, avoid baths and not run taps while brushing teeth or washing dishes.

They’re also asked to run washing machines with full loads or on eco mode, use the toilet multiple times before flushing, and recycle unused water.