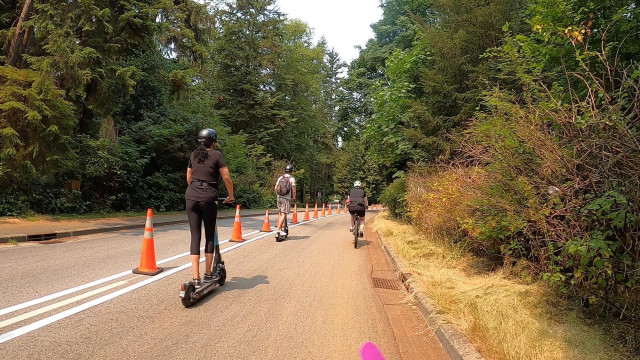 Stanley Park Drive is returning to a two-lane vehicle road as it was in 2019 after a vote by the Vancouver Board of Parks and Recreation.

The seven-commissioner board voted six to one Monday night in favour of a motion to end the temporary separated bike lane that has been in one of the roadway's lanes since the summer of 2020 when it was created as part of the city's pandemic response.

Parks staff have been instructed to immediately "restore the pre-COVID traffic" configuration at the park.

The motion was brought forward by the ABC's Commissioner Angela Haer.

"We brought this motion forward because we were worried about the equitable access to Stanley Park including disabled people, seniors, and families with small children," she said while introducing the motion at the Dec. 5 board meeting.

She also noted concerns about access for buses and how the reduced roadway was affecting tourism businesses.

The motion did not go unopposed, as supporters from Love the Lane showed up and the only non-ABC commissioner, Commisioner Tom Digby of the Green Party spoke against the motion.

"Drivability is not the hallmark of a world-class park," he said. "It's not a question of how fast you get around a park."

He also raised concerns about the cost of realigning the traffic on the roadway now and then doing it again as there is already discussion about a permanent bike lane through Stanley Park next year. Haer noted staff would be providing a report on cost in the future.