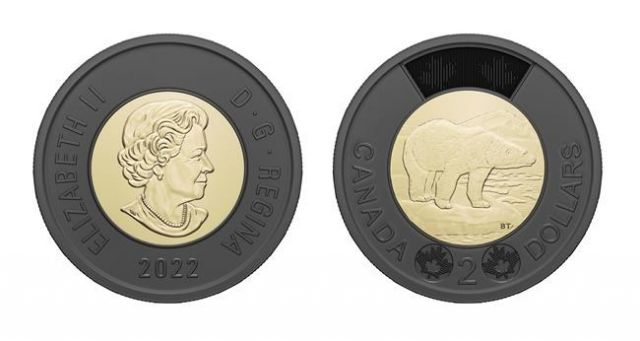 The mint says the coin's black outer ring is intended to evoke a "mourning armband" to honour the queen, who died in September after 70 years on the throne.

The mint says it will start to circulate nearly five million of the coins this month, and they will gradually appear as banks restock inventories.

Aside from the black ring, the mint says the coin retains the same design elements of the standard toonie.

Four different images of the queen have graced Canadian coins since 1953, when she was crowned.

The core of the commemorative toonie will feature the same portrait of the queen that has been in circulation since 2003, with a polar bear design on the other side.

"Queen Elizabeth II served as Canada's head of state for seven decades and for millions of Canadians, she was the only monarch they had ever known," Marie Lemay, president and CEO of the Royal Canadian Mint, wrote in a statement.

"Our special $2 circulation coin offers Canadians a way to remember her."

The mint says it may produce more of the coins, depending on what it calls "marketplace needs."